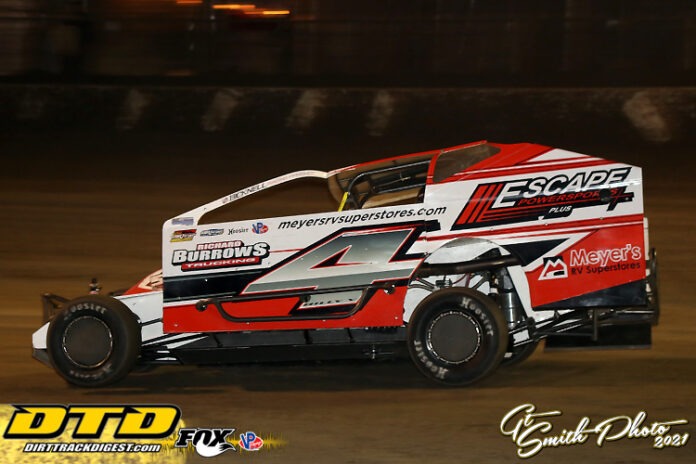 Billy VanInwegen is a racer whether it be a winged or topless Sprint Car or a Modified.

This week he brought his new red and white No. 4 to the DIRTcar Nationals and on Friday night it all came together with his best finish of the week as he crossed the line in fourth.

He noted he had to make his moves early on as the track was locking down. He started seventh and moved quickly to grab a couple of spots.

It was around lap 10 that single file, parade racing took over on the one lane Volusia surface.

Despite the train it was bumper to bumper with everyone waiting for the driver in front of them to make a miscue and leave the inside open. Billy was never able to gain much of an advantage over fifth place Peter Britten while earlier Ryan Godown was a formidable foe for VanInwegen.

He was one of the surprise entries at this year’s DIRTcar Nationals and said, “I didn’t get to do as much Modified racing as I wanted to last year.  We put this new Bicknell together last year and I wanted to run it a little more.”

Upon arrival the team came out of the box as Billy explained, “The first night we were pretty good. We missed it a little bit in time trials. We need to find a little bit more speed in time trials to get a chance for a restart spot, but with the eight guys up there in the draw it’s tough to move forward.”

The surface at Volusia this year has changed and Billy said, “This is more like a New York type of deal. It’s not that far off from Orange County. It holds a little bit of grip for time trials and then by the feature it’s black and dusty. I really didn’t see much of a difference when we ran after the Late Models. I would rather run before them. I thought the racing was better, but I don’t know why.”

However, no matter what happens here he feels that it is beneficial overall.

“When you go back home you are in the swing of the racing already. You are working on tire stuff and getting your trailer organized. So I feel I am a little ahead in the beginning ahead of some of the guys that don’t come down here,” said Billy, “They are getting ready through the first three weeks of the season while we are already while we’ve already gone through our stuff.”

Turning that question around and inquiring whether anything down here helps at home he explained, “Yes and no. I think anytime you can go to a race track, no matter where it is, it makes you better You definitely don’t get better sitting home on a couch.”

Not only does Billy V run Modifieds, but he is widely known for his Sprint Car seat time.

Reflecting on that, “The last couple years I have, but last year I only got to do about four Sprint Car shows in New York with it being shutdown. That allowed me to do a little more big-block stuff than we normally would, but I didn’t get to do as much of that as I would have liked either. We had two wins in Empire Super Sprints in 2019 and two in the big-Block. COVID killed the momentum for last year. I had about eight or nine shows last year in the Michaels 5g last year in the Eastern (360) Wingless Series.”

Continuing he said, “I think the Wingless Sprints translates more to what we do with our Modified.”

Looking ahead to ‘21, Billy V said, “We have to play it by ear and see what happens in New York. It’s so hard to make plans and not be sure and what actually will happen. I will be racing as much as I can and anything I can. We definitely are planning the big-block for Middletown and any Sprint car racing we can do other than that we will do that.”