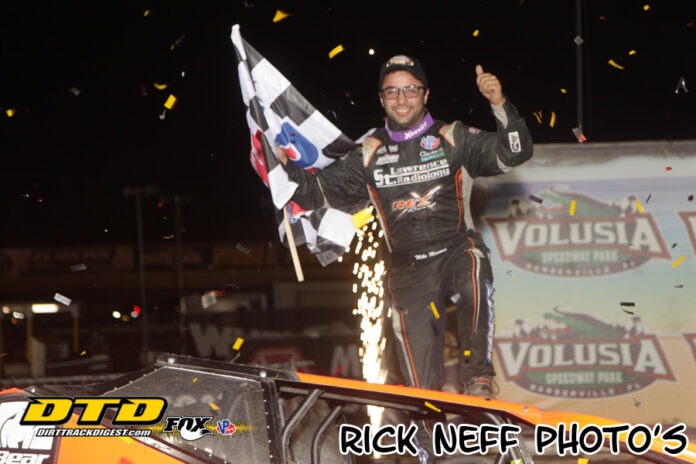 “Gotta Get A Gator” used to be a saying by vendors to buy a Gater Racing News.

However, that phrase has a totally different meaning in Florida racing circles as drivers from all over the country invade Volusia Speedway in February hoping to take home, if not the huge championship gator, the nightly smaller cousins.

On Friday night the Super DIRTcar Series Modifieds closed out their Florida swing for 2021 and the last little gator went home to Potsdam, N.Y., with Mike Maresca.

The team had been building toward this night all week long and he was one of the few consistent drivers in every feature event.

Pole sitter Maresca went side-by-side with his front row partner Matt Sheppard, but eventually not only pulled away, but ran away with a huge 7.7 lead. A late race yellow eliminated the advantage, but he still coasted to his first non-point Super DIRTcar Series win.

The final 20 laps of the race was simply a follow the leader as the only lane that existed was on the inside.

Maresca noted, “I would have liked to win my first gator and Super DIRTcar Series on a better surface and a better race.”

He’s been steady each time out of the gate at Volusia, but on night two he finished third behind Stewart Friesen and Erick Rudolph. Post race he appeared a bit depressed and explained, “No, I just like to win. If I don’t win because of stuff I did I get pretty hard on myself. Honestly, we were pretty happy with it. I have to say that whenever I am in victory lane I am still in race mode and I have to work on that.

“Obviously, we had a pretty good car and wanted to win. Hopefully we can do what we came here to do and that is to win a race. I have never won down here and I really want to. Hopefully we can have as good a night tonight as we did the night before.”

Describing Volusia layout, Mike said, “It’s pretty tricky and got a weird feel to it probably more now than ever. It has kind of a film on the dirt that rolls around the race track. It is obviously a fun place to go around because it is so challenging.”

The movement of the car is different from other tracks as he explained, “Yeah, earlier in the night the when there is some traction and you put your front tires on and steer it is not so bad, but that goes away and when you do hit those slick spots, because you are going so fast, the car just skates across.

“Back home the tracks get slippery and the actual speed or miles per hour are so much slower that the front tires can grip a little more. Right here your are carrying too much speed for how quick it is because of the banking and simply the raw speed of the race track.”

Volusia wasn’t the first Florida stop for Maresca as he was over at Bubba with a totally different car running the Short Track Super Series events.

Talking about that he spoke initially about his new ride.

Mike said, “The DKM car is simply awesome and Gary (Simpson) and his whole crew is a great deal.  I’m looking forward to driving for them this season. We were having a great time and actually went back to Gary’s house in Delaware between these two weeks off from racing and worked back there.

“They are great people and the car is totally new and it is something to be a part of it. Every night we are learning and building a notebook, but its been a lot of fun running that four link car as it is right up my alley.”

Continuing he said, “The car has a lot of speed and it has a lot of potential. It is all about harnessing it and dialing it in the right way. We should be able to stay on the right track and hopefully win some races for Gary and the guys at DKM and sell some more of those cars.”

Maresca will be seeing much of the Northeast this season and looking ahead talked about the upcoming season.

Where will the 2020 Can-Am and Fonda champion run?

Well, he said, “We will race Utica-Rome on Friday nights and Fonda on Saturday night and Deyo South series with the 12K.  We might do some of the Northern races in my family’s stuff as well as big-block Series races that make sense to me along with 358 races that also make sense I will try to get to. I will probably do more shows with the American Racer Tires as I will be running them weekly, but also will try to stay relative on the Hoosier tires too.”

It’s been a bit different in regards to the tires he has run in his career and he is being forced to adjust.

Mike explained, saying, “I grew up racing the Hoosier stuff so I had to adapt the other way to the Racers. The biggest thing is to stay racing bi-weekly and try to find races to go to with the big-block and Hoosiers to stay up to speed and relevant with everything.”

He will be in pursuit of a title once again as he closed by saying, “We will go to Utica on Friday and hopefully get our first traveling title. That is the goal.”