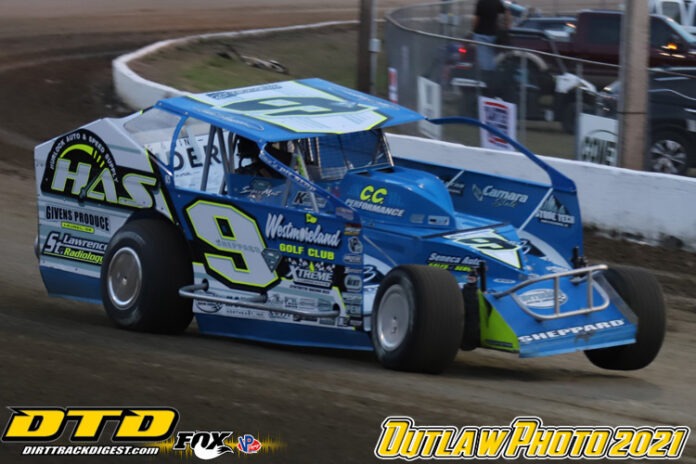 Matt Sheppard has been in Florida for quite some time, but it certainly hasn’t been restful.

He started the trek in the three day show at Bubba Raceway Park running the Short Track Super Series and had his struggles.

So he came to Volusia for the DIRTcar Nationals hoping his luck would change.

And for the first couple of nights, it didn’t with a sixth and ninth the first two nights.

On Thursday night standing next to his truck he said, “I am not testing anything down here. The car simply won’t turn. I just can’t steer it. I have had that problem with these Florida tracks.  I don’t know why I even come down here.”

The frustration was evident as this isn’t a common predicament for the 9s.

So out he went on Thursday and it appeared whatever changes the team had made were working.

He timed fastest in his group and outdistance Matt Stangle to win the fourth heat.

Sheppard was in the redraw and with his best draw of the week was inside of the second row.

Was the monkey finally going to be off his back?

Well, on the first lap Sheppard knew there was water on the low side of the track, drifted up to avoid it. Max McLaughlin, who started right behind him, slipped on the water and got into the 9s sending Sheppard toward the wall. Peter Britten had nowhere to go and was collected against the outside wall.

Matt expressed his displeasure with Max as the field came around, but then went to the rear of the field.

By the 15th lap Matt had worked his way up to eighth and made a gigantic run in the closing laps to come home with a top five finish.

Matt showed his ability to run up front hasn’t disappeared as on what proved to be the final night of the Nationals he came out strong.

He chalked up fast time in his heat and win comfortably over Britten. He then drew the outside of the front row for the 30-lap main.

Maresca pulled away as the track locked down to one lane around the ten lap mark.

So in a Florida trip that was less successful than he hoped for.  He certainly made the needed adjustments to run up front.

It was unfortunate there simply wasn’t one more night, but it wasn’t to be.