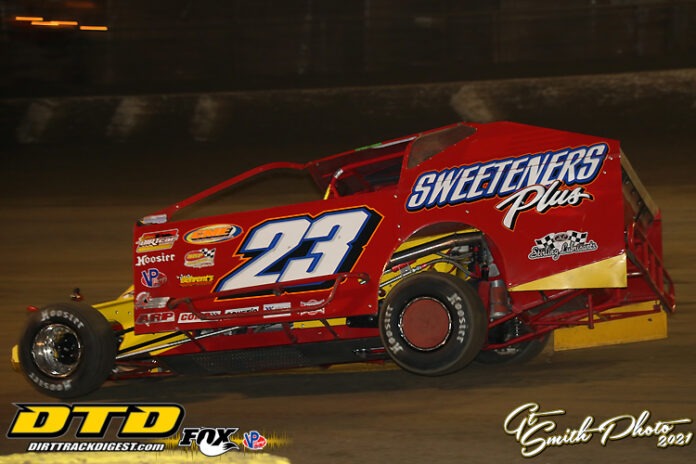 While watching a race a real fan not only watches the battles up front, but also spends time perusing the rest of the field to see if there are any surprises.

Well, last Thursday as two older adults, wearing white hoodies, sitting in the second turn pit grandstand cheered wildly for a car in the middle of the pack it was obvious they had a favorite and they were jumping up and down for good reason.

Sixth year Modified driver Kyle Coffey, who was getting his feet wet on the “hammer down” Volusia Speedway, was having the run of the week which eventually saw him settling for eighth.

The young driver, when asked about those wild fans said, “Yeah, that must have been my mom and step dad. They are always cheering for me.”

He reflected on the eighth place finish from his 21st starting position, ”I felt really good in the car and it handled very well considering how it felt in our heat race. We went out and had made some changes that we thought would benefit us and they ended up helping a little bit so we started a little bit further back in the feature than we wanted.

“With the rain delay we knew that it was going to be a pretty fast race track and went out for hot laps for a couple of times where we were working it in. I kind of figured it was going to be slimy throughout the whole event, but I was able to run the bottom most of the time.

“The feature was tricky with how fast everybody was. Everybody was running that bottom line for quite a while until the top got worked in nicely and they started moving around more, but our car felt really good on the bottom and I was progressing nicely, passing  guys, they’d move up to make a move and leave a hold there. I could just put it where I wanted and the traction it was getting off the corners was really great. It was a pretty good night for us.”

However, the first two nights were significantly different for the six year Modified driver of the Coffey-McCreadie Enterprises No. 23.

Kyle said, “The first night wasn’t so bad for us and we started deep. I drove up to 12th or 13th and the tire faded a bit. It wasn’t a terrible night for us and we thought we had made some deep steps to kinda work on our little slick track grip setup and stuff like that. The second night was a reset. In the heat race Peter (Britten) got turned sideways in front of us and I had nowhere to go.

“I was committed to run the top and got hit from behind. It was mostly body damage and we had to swap the front end out and kind of do what we could with the body. We didn’t want to put new stuff on so we banged it out the best we could. In the feature I was making sure everything was feeling right and the front end didn’t wasn’t square and didn’t square like it needed to be so we had to swap out stuff for the next day. It was kind of a rough day for us, but it was good to rebound last night.”

The good feature was a boost to Kyle as he explained, “It means a lot. I like to come down here and if you can run up front it’s really good because of the caliber of drivers down here. It is the best of the best. To be able to drive up through the field like that is pretty cool.”

His dad Vic is right there in the pits thrashing on the car as one of the top Central New York drivers not only was successful in Modifieds, but also showed his hand in the World of Outlaw Late Models.

What does Vic mean to Kyle?

“He has a ton of impact.  There is a lot of work that needs to be done and I still need to learn. He has that big mindset of knowledge that he’s been carrying around for 20 years of this whole system. We are both kind of still learning with this coil over system and this and that, short rods, long rods and some guys are back and forth on that. It is a learning process for both of us right now to figure out what is best for the car to compete. It is a lot of fun racing with him. He can be a little hard sometimes, but he wants to run up front just like we all do,” Coffey explained.

The two car team is rarin’ to go as Kyle said, “Max’s car is a 2020 that was built later in the season before Oktoberfast and my car is actually a 2017 or ‘18 that Tim McCreadie was driving for us when he was still around. We ran it down at All Tech last year with a 360 in it and it was pretty good and we ran it at select shows. It has always been a good car and we thought it would be the best piece to bring down to start the year off.”

The 2021 season is here, but the team isn’t exactly sure what their path will be as Coffey noted, “We aren’t really sure yet. We were thinking about changing some stuff up, but I don’t think we have and definite plans for weekly stuff. We will be doing something weekly  probably Friday and Saturdays, but we just aren’t sure where we want to go yet.

“I am going to try to do as much of the Super DIRTcar Series and the stuff I don’t plan on doing I will probably go help Max (McLaughlin) out to make sure the 32c is up at the front of the field. I am going to do a little bit of the STSS North series.  We also plan to bounce around to other events and do what we can.”

With all the shifting from SDS to STSS the 24-year-old driver needs to be able to adjust between Hoosiers and American Racers.

He said, “It can be challenging sometimes, but we are getting the hang of it. We have been doing that for a couple of years now with Canandaigua and Outlaw. Two years in a row we ran the same car back to back switching stuff over, the ride heights, figuring out how the tires affect the car and what it is doing. We run sail panels on at Outlaw and the grip you get with those is a lot different than the grip you get with our standard set up. It’s challenging, but a lot of fun going back to back.”

The upcoming season will see Kyle continue his quest to become a better racer as he said, “It is about getting seat time. I want to go to as many places as I can. You know the bigger and longer events are there. The longer you can be in the seat the better for me.”

Kyle made some fans aware of his presence on Thursday night, but unfortunately didn’t get to complete the week as Mother Nature had a different idea.