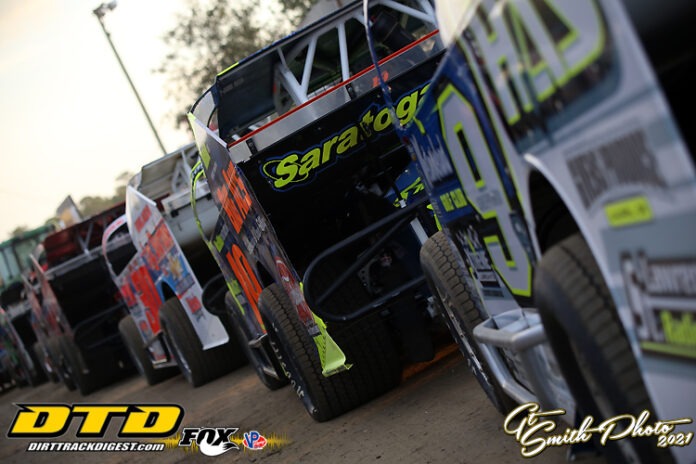 For Northeasterners’ the yearly pilgrimage to Volusia is a right of passage.

While Late Model fans suffer through the “Beasts of the Northeast” as many of those folks simply don’t like what we treasure, the Mod fans wait patiently for their cars to hit the surface.

Five nights are scheduled and usually at least one is lost to the “pop-ups” that start with a sprinkle and end in a short track flooding torrential downpour.

Being part of the Dirt Track Digest coverage for the past few years this week usually provides a few things that don’t actually fit in the nightly notebooks.

Sometimes it is a quote that lingers.

It is no secret Matt Sheppard and Max McLaughlin had an altercation in the pits and when asked how it feels to win at Volusia Max innocently said, “It hurts.”

Shane Andrews “Grandpa take a Viagra pill, it’s to get it on” is gone…it’s history. He told me, “It was time to hang it up.”

He did come up with a good one with the checkered flag falling, “It’s not hot. It’s not cold. It’s not chilly. It’s Freezin’” as Stewart rolled across the finish line on night two.

Cajun Modified rookie Brandon Hightower has made a major racing shift. He will be running the SDS and STSS series. The big small-block at Bubba he seemed to get the handle on, but not so the big-block. On night three at Volusia he was chasing something he couldn’t find and was frustrated. He said, “I wish I was at a Deyo show.”

Only because he just hasn’t figured out the big-block. He is running 106 races this year and Friday meant that he had 100 to go.

One that confused me was that everyone talked about “new clay.” Apparently the powers to be told the announcers to use, “It’s not new clay, it’s different clay”.

Seriously, what does that mean?  Everyone knows that it was a different surface than last year.

Being nearly 70 years old I have been “encouraged” by my wife to take care of myself. Thus the group things I’ve been able to do in the past were out of the question for me.

I was wearing a mask and felt like a one eyed cyclops as people just looked at me. In other words, masks were invisible. Maybe it’s just a Florida thing.

It’s funny I’ve been a “race” fan forever. Though not a huge Late Model fan they, but they usually put on one hell of a show. Every lap is balls out and the cars dart like mosquitoes as you never quite know where they are going.

Kyle Stickler put on a show on night and while everyone liked it up on top there was the High-side Tickler living on the low side running through potholes that we get up north after a long winter. There were times coming into the first turn that the car simply lifted all fours off the ground, engine revving and untold RPM’s and landing like an overloaded Fed Ex jet.

Late Models drive through holes Mods drive around them. Sometimes the only way for Mods to get through one and three was go as high as possible on the track.

Thursday night it rained and any other promoter would have said “that’s it,” but when it stopped around 8 racing resumed around 11. It was a two day show with the Mod feature at 12:30 a.m. Friday.

When this happens at Volusia it usually means the track will be heavy and faster. So  usually guys load up. Only Dave Rauscher did for the Mods, but he told me, “A guy on my crew had an early morning business call and I had to run to the airport. Hey, I don’t race for the money and these guys help me out so I help them,”

Several Late Models called it a night and in fact, a dozen left the next morning. The thing about Volusia is that you have WoO and Lucas Oil drivers. WoO guys have no choice. Lucas has been in Florida for weeks running the week long East Bay show and other multi-date races at All Tech and Bubba. For some their equipment is pretty beat up before the start of their regular season so when they say it’s over, it’s over.

Track conditions were a major topic of conversation wherever you went in the pits. Stewart Friesen said the second night he won that some spots were slick and others that appeared to be slick gripped your tires. Everyone was in the same game, but despite that this track provides hammer down running for just about every class. This might be the fastest regular track there is which is rather surprising when the more legendary ones like Eldora and Knoxville aren’t as fast.

A few years ago one nationally known Sprint Car driver hot lapped, came in, hopped out of the car and said, “I am just not comfortable here. I just can’t get comfortable.”

But, after Volusia competitors hit the road I sat back to think about the Modified racing I had seen in the past few weeks.

STSS versus DIRTcar will be going full bore in 2021.

Hopefully the confrontation between the two will benefit drivers. Volusia boosted the purse as I would say it was due to what Deyo was paying in his races. That’s good.

However, I listen to fans who say “Dirt did this” and “Deyo did that” and I go back to remember something my eighth grade teacher, Sister Ann Miriam, told me, “Be an individual.”

It meant basically do what you do and don’t worry about what someone else is doing.

If each organization puts on the best show possible, the fans and drivers benefit. Thus it is good for racing.

I think in two years we’ve seen something that will probably continue for years to come.

There will be two Florida Modified series in the winter…the STSS Sunshine Swing (say that fast three times) and DIRTcar Nationals. One will have money and the other tradition. One thing I’ve learned is that fans worry more about what is paid in the purse than drivers. Racing isn’t a profit making business for racers…never has been, never will be.

Certainly each has their own following and there will be some overlap between the two series. This year, with over a week between shows, a few stayed while others went to North Carolina or other places to prep the return to Volusia.

There is no doubt DIRTcar needed those STSS regulars this year. Bubba had 46 Modifieds and 32 for SDS. One difference is that every car raced in the SDS features.

Many regulars simply didn’t come south this year. Larry Wight and his wife along with Demetrios Drellos had new babies. There were no Billy Pauch, Anthony Perrego, Andy Bachetti or Mike Mahaney (who said it wasn’t financially worthwhile), while Tyler Siri now owns four big small-blocks so he won’t have “The Doctor”  or any of this cars at SDS shows. Where were the Western Pennsylvania cars as not a one made an appearance after a handful last year.

Growing up around racing and watching people promote I learned quite a bit. In today’s world there simply aren’t as many promoters as there use to be.

I remember Dick O’Brien, Jim Vollerstein, Al Gerber, Lindy Vicari, Marilyn Toal, Marcia Wetmore, Alex Friesen, Ben Dodge and others rolling up the odometer to get drivers to come to their special events.

Yeah, that was the old days and we don’t do it that way anymore, but it worked.

Sponsors and promotions are a crucial part to the sport, but let announcers talk about a product. Give them a crib sheet and quit scripting everything.

Every announcer has a style, but I was stunned when I heard Rich Eshelman read a similar Johnny Gibson “you wanted the best” script for the start of the Late Models. Rich is a professional. For God sake let him do his thing. The “you wanted the best” is Johnny’s and only Johnny’s. Don’t make Eshelman be Gibson 2.0 as it isn’t him. Will we hear Shane Andrews be “encouraged” to read that for the Mods?  He has retired “Grandpa take a Viagra. It’s time to get it on.”

And while we are at it, when you have a big show please use announcers who know the division. Here we are at the 50th anniversary at the Nationals and the co-announcer to Shane had difficulty with names. No excuse for that. The infield announcer was the Hell Tour announcer for UMP and had no idea who any of the Mod drivers were. He had never seen a Mod until this week.

When you immerse yourself into an event for four (and sometimes five days) sometimes you hear, see and learn too much.

Sometimes it is better to simply be a fan. Come, watch and ride home.

Well, that’s it covering Mods for a while. As always fun to talk with folks I haven’t seen in a while (as I went to two races last year) and looking forward to doing a bit more writing this year. Hopefully you enjoyed the DTD coverage of the Nationals as much as I enjoyed writing stories for your reading pleasure.

Once again this column is not the opinion on DTD management, but simply my thoughts (that is why it is a column and not a story).

You can send along comments, gossip, news, thoughts etc. to foley395@hotmail.com