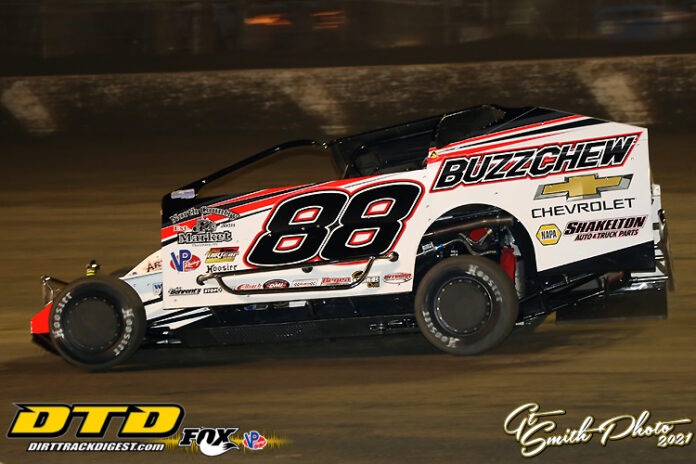 Mat Williamson will be the only driver ever to hold the Super DIRT Week Champion title for two years despite winning only one race.

With COVID erasing the annual event in 2020, the ‘19 winner remains the defending champion when the cars return this October.

However, Williamson is anxious to get back to more normal racing action this year as he faced many obstacles getting to and from the track last year.

At Volusia the No. 88 was fast, but a victory never resulted despite the hard work of the Buzz Crew team.

Talking about his week, “We really haven’t been up front. The first night we started seventh, got to fifth. We were okay. We were struggling to hold on to fifth at the end of the race. We made some changes last night and I feel we made the right changes, but right off the green flag things went down hill from there. 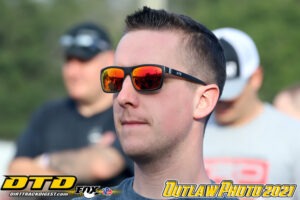 “We got pushed up the track right off and hit the wall a little bit and Max (McLaughlin) slammed me in the right front. Very unnecessary on lap one of a race like that. Tim McCreadie said it perfectly at the beginning of the week that people just don’t have respect anymore.”

Continuing he said , “It’s tough for me because I drive for car owners too and we aren’t playing with our money. So, I have to be smart about it and race each other with a little more respect.”

About that “push up the track” Mat said, ”I went over and talked to him last night and voiced my displeasure and told him on lap 28 if he had done that I would have gone over and shake his hand after the race. It was unnecessary. He got into a four wheel push and the size of it was to hit me, hit the wall or hit whatever was going to stop him from pushing. I tried to lift and avoid contact, but when he hit the left front it bent the axle and that ruined my night.”

He has faced the COVID deal as one of the lone drivers to cross the border and in anticipating of the upcoming season explained, “After an unexpected season last year you don’t really know what’s going to happen. We are down here living life large and it seems like there isn’t even a pandemic going on. We are trying to keep safe, washing our hands and trying to maintain our own area.”

Continuing he added, “I hope when we get back people get vaccinated and we can go back to a normal life. When we got here we went out for dinner I was astounded at what was happening. You know I am not a big conspiracy theorist, but I believe Florida is handling it right and treating it like the flu. Obviously, a lot of people have died, but a lot of people die daily from other things. I don’t know what to say about the pandemic when I talk about it because you make 50% of the people mad and 50% the other way. “

COVID has impacted his racing and Mat explained, “Coming over I have to go into the customs office and give them my paperwork. They look over everything. They look over my passport and I have to tread lightly and walk a thin line when I am over here because if I do anything bad, I might not be able to come. I have to behave when I am here so I can continue to come over here.  When I am here I have to be safe and not transmit the virus back to Canada. It is a lot on me as you are trying race and keep a clear head to race.”

His racing treks to the United States do not come without a bit of controversy.

Mat explained, “A lot of people talk bad and say I shouldn’t be able to cross the border for racing, but at the end of the day this is how I make a living. If some people are willing to pay for my mortgage and pay for my meals and stuff I will stop coming. When I go back I get tested. When I leave I get tested. It’s not easy on me and I have to get through it all the time.”

Rules change, but Williamson said, “I quarantine until I get two tests results back. Usually in the summertime I had raced on Sunday or Monday at Devil’s Bowl (Vermont) and I had to drive back through the night to get home to get to a 9 a.m. test so I could be tested on the following Thursday and be able to race that Friday at Brockville.”

This year Mat has made up his mind where he is racing and said, “We are running every Super DIRTcar Series race no matter what.  Even if we have troubles we will figure it out. It is the same with Jeff’s (Behrant) car, but I don’t think we can follow the entire Short Track Super Series because of conflicts with Oswego and I-88 and the final Fonda 200 against Canandaigua. I wish we could be part of the Short Track Super Series, but we will be a part of it and do as many big races. We will probably be at Orange County to chase the championship there with the way they have things scheduled.

“Hopefully, Ransomville opens back up and we want to race a lot. We will try to do as many 358 races as possible, but not the same as last year. We do have Cornwall and Mohawk already on our schedule as they are back to back. They are fun and and easy to be at.”

So the Buzz Chew team has successfully made the transition from NASCAR asphalt to dirt and with Mat Williamson behind the wheel continues to be among the elite young drivers in the sport.