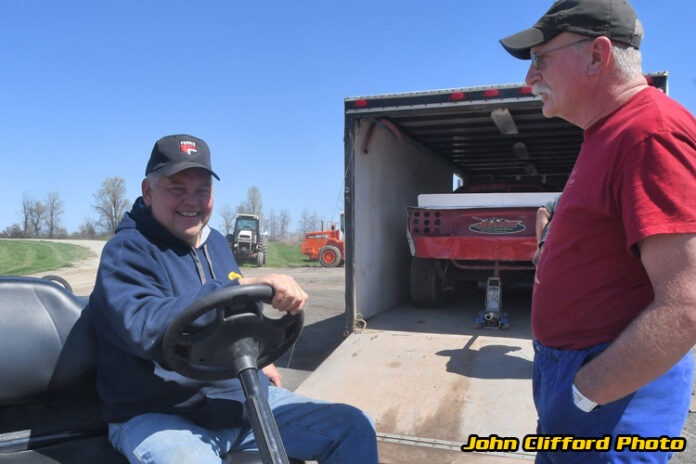 Everyone has a dream and Bill Shea is no different.

The passionate race fan and former car owner got an opportunity to live a dream, and though at times it might have appeared his wife Kim and himself were in a nightmare, they gave it all they had.

The Utica-Rome Speedway is headed in a different direction toward Friday night’s this year under the direction of Brett Deyo.

However, Bill Shea, who has logged a marathon hours maintaining, refurbishing and being passionate will be doing other things.

Recently during the DIRTcar Nationals in Florida, Bill sat down with Dirt Track Digest for an exclusive question and answer session about his past, present and future in auto racing.

Dirt Track Digest: Bill, it was really a sad thing this year as you have had to leave racing. That must be hard to do?

Bill Shea: “Bill, it is not a sad thing. We are happy to be on with life beyond racing and it is not the end of racing because I plan on going to a lot of races now. I am a race fan. I couldn’t go to a lot of races when we owned the track because we spent all day Friday and Saturday getting ready for Sunday. Now I get to go to races.”

DTD: Obviously, you have a long racing background. How did you get started?

Shea: “Well, it started by going to the Utica-Rome Speedway a long time ago with my dad. My mom and dad were huge race fans and we would go over there in the late 60’s all the way through today. I wanted to race, but got married young, had kids. I had two boys and we raced microds and go karts up in Syracuse.

“Shortly after my oldest son outgrew the microds we were looking to get into something else and I wasn’t a real dirt fan. I was all asphalt. So we got ourselves a limited super, small block super,  and raced at Oswego for about six years. He moved away for a job and I hooked up with Willy Decker. We bought a small-block Modified and then a big-block Modified.  We had a pretty good team going when Gene Cole approached me about buying the Utica-Rome Speedway, my wife and I.”

Shea: “The first year we had a really good year. The second year was a decent year and then the third, fourth, fifth and sixth we battled rain and each year it seemed to get worse.  And the last year it was COVID. It was just very difficult to make any money there at all. It  cost us a lot of money.

“The problem was when I bought it I was going to retire from Ferris and eventually do Utica-Rome full time, but as it turned out I was never going to retire because I had to keep working at Briggs Stratton and Ferris to pay the bills at Utica-Rome.”

DTD: Your dream was to own the track. How hard was it to give up your dream?

Shea: “Oh, it’s not hard. It was a lot of work. Two years ago I had a heart attack, open heart surgery, a triple bypass and had a lot of complications with it. My wife picked up the slack and just worked like a dog over there. She would put in 18 hour days. Even when it rains you still have to put the time is as it may not rain. You put the time in, do everything you are supposed to do and then you get the rain out and start all over again. You still have payroll and everything else to take care of. Whether you employ five employees or 50 on race day you still have to go through all the motions. She worked really, really hard and I wasn’t able to help her. For a few months I couldn’t come out of the house. She was just a saint.

“When Gene came to me in April and asked about buying the track back and I said sure it is probably time to give up as we had just exhausted our energy on this thing.  It took from April to December to make this thing happen. Legally there was a lot you have to go through. Gene bought it back and we lost some money, but Gene treated us really fair. I like Gene Cole. He’s a good guy and been good to me. Ya know, we are good to go. Brett has the track now and I wish him the best of luck..”

DTD: What did you learn about racing that you didn’t know before?

Shea: “Well what I learned there are actually very few real friendships in racing. There are a few, but most people, I don’t care if it’s a racer or a promoter, they are in it for themselves. They really couldn’t care about anybody else. I tried to reach out and make things happen, cross promote and do different things with different tracks. It was all okay as long as it was them that benefited.

“A couple that come to mind is John Wight. He treated me great and helped me out as far as lending me equipment and helping me get a few things repaired. Lyle DeVore was good and Harvey (Fink). And then there were just others. It is a cut throat game. It’s tough.”

DTD: You were part of the World Racing Group. Any thoughts?

Shea: “There are things that could change with DIRTcar. DIRTcar is a big organization. I enjoy working with Dean Reynolds and I like Mike Perrotte. They are great guys, but the people in North Carolina you call them and they never call you back. The only time they call you is when they wanted your sanctioning fees. We would send that to them and be up to date. In fact they owe us some money as we overpaid the sanctioning fees, but you know somebody has to be in charge and it is them.

“I like the dirt drivers. They seem to support you pretty good. DIRTcar has a great rule book and some of these other series basically use the DIRTcar rulebook, but they might modify it some for sure, but all the safety stuff comes out of dirt and they put a lot of money and a lot of effort in to putting that together and I appreciate that.”

DTD: Now that your not a track owner and you get to be a fan again are there any races on your bucket list?

Shea: “No, I’ve seen just about everything I need to see on my bucket list, but there are a lot of them I enjoy that I want to go back to. I want to spend some more time up at Oswego. I am an asphalt guy and I love going up there. I’ll go up to see some of the friends I’ve made up there over the year and probably get Zupan (Doug) to ride up with me on a Saturday night because he lives close by. I will definitely go to Fulton too. John always treats us well. Weedsport, Jimmy’s (Phelps) a great guy, and can’t wait to get out there to see him. Not really a bucket list. I just wanna go see racing. I love good racing.”

DTD: This is a tough one and you might not want to answer it…Utica-Rome….Friday nights….Brett Deyo. Is it going to be hard to go back to Utica-Rome?

Shea: “Yeah, it is going to be hard to go back to Utica-Rome, but I’ve already told him I am going to come over to give him a hand. There is a lot of equipment there that you have to hold your mouth just right to get it to start.  Someone needs to show him how to do it. We are going to help him with that stuff.

“It might not be that tough as I will sit in the stands and watch some racing. I’m just a race fan. I truly wish for everybody in the area that Brett is successful. The track deserves to be successful. It is a great track. I put six years in and worked like crazy to make it better. You know if I had had guts enough to switch to a Friday night maybe we could have been better, but I never wanted to step on John Wight’s toes because John always treated me so good and Lyle, he races Friday night so I didn’t want to step on him either. It wasn’t like we got that many cars from Albany-Saratoga, but we do get a few.

DTD: You are a fan. You love racing. How disappointing is all this? You have such a passion. How hard is that?

Shea: “It’s not that hard. My wife and I are pretty happy. My health has not been that good. It appears to be good, but I struggle. Last year I was grading the track, got out of the grader, I fell to the ground and the next thing you know a half hour later Kim drives by and sees me laying there and took me to the hospital. I spent a week and a half in the hospital.

“At some point it’s time to give it up for health reasons. I’ve got grandkids and they love to see me. They love to ride their four-wheelers and stuff like that.  I enjoy doing that with them and I can’t wait to spend more time with them, taking them to the beach, taking them camping or whatever else we can do.”

DTD: Any idea of what’s going to happen down the road?

“I don’t have to worry on a Sunday afternoon if I should call a race. My heart always said  ‘don’t call the race’. So I don’t call it, sell some tickets, run half a race and it ends up costing me $20,000 bucks for the night. You go, ‘Wow, I should have called the race.’ I thought you could lose money fast owning race cars, but you can lose it a lot faster owning a race track. It is just I am glad to be out of it. I appreciate the people who do it, but I am happy to be a spectator and to help wherever I can.”

In an era of auto racing tracks becoming lost speedways, their dedication kept the Route 5 in Vernon track running for the past six years.

They overcame so much to provide a race track for the racers and fans.

They weren’t seeking glory, but hoped that a retirement could be supported through the operation of the historic speedway.

Life is full of “ifs” and if Mother Nature hadn’t wiped out a tremendous number of show and the pandemic never happened who knows what would have happened.

However, Bill and Kim won’t be spending time riding a grader, organizing a food order, making sure the public address system or cutting grass over the huge parking lot anymore.

They will be able to spend time with family and friends and the dedicated partners will be smiling more and visiting with friends around race tracks throughout New York State.

To Bill and Kim “Thank you!”