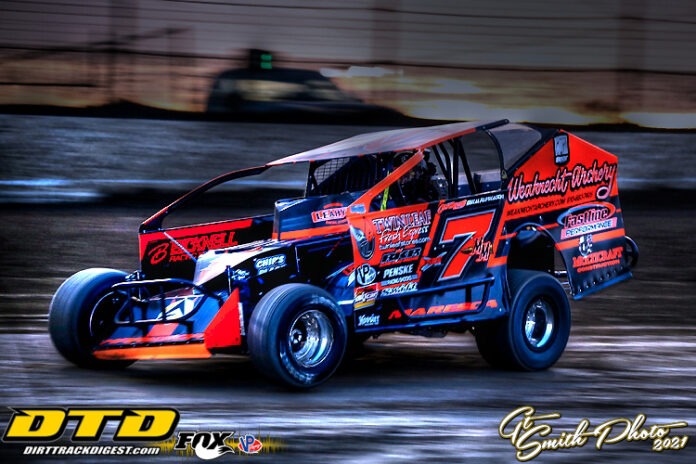 Who really knows, but “sticks” were definitely a point of conversation in the pits on a nightly basis.

Feature winners Max McLaughlin and Mike Maresca used them en-route to their feature wins as Modified fans have something a bit different to throw into the weekly conspiracy theories on the internet.

For fans that might not be familiar with “sticks” Friday night winner Maresca talked to Dirt Track Digest after winning his first gator.

Providing the background, Mike explained, “Signal sticks, I don’t know if I was the first one to use them, as they were being used in Ohio and guys were using them in PA. I know Matty (Williamson) started using them about the time I started to use them. I think we were one of the first in the Super DIRTcar Series to use them, but basically what it is you have a crew guy on the infield, depending on the race track, be somewhere where you can see him. At some tracks there might not be many places where you can see them under the green, but here it’s a different story with the infield parking. You can see guys with their signal sticks for just about the whole race. At some places you can only see them under yellow. Can Am is one of those places.”

Continuing he said, “But it gives you an idea of the gap, what lines are dominant, top bottom and if someone is coming on the top you can go up there and try it out before they get there. Or if someone in the back is making hay on the top or bottom and your spotter is looking at lap times they can get you down. that. It is pretty common in Late Model and UMP racing and IMCA.”

Addressing the SDS cars, Maresca said, “It is getting more common in ours and you can’t really outlaw it because there’s too many ways around it. So obviously it is going to be a part of our racing as everyone wants to get an edge and you see 10 or 12 teams here today using signal sticks. They each have a person out there.. It is not really used to race dirty, but it is used to let a driver know when he is out front what is going on. If you have a good lap or do something different you know if it is good.”

What does it mean for the fans?

Mike said, “I think it is kind of cool for the fans because it gives them another aspect to watch at the races. Obviously, there are pros and cons and I am sure some people might use it improperly and make people mad. I lost races with signal sticks too. I lost a race at Freedom. Two years ago. The guy was on the top and I was on the bottom. I moved to the top and he went by me on the bottom. If I had stayed there I might have won the race.”

The night McLaughlin won he slid up in front of a momentum filled Billy Decker as the duo entered the third turn.

Decker was not enthusiastic over the move and noted, “When a guy with the sticks tells you to move up you move up.”

Super Dirt Series Director Dean Reynolds told DTD, “The rule allowing sticks has been in the rulebook for six or seven years.”

He had no problem whatsoever with their use and didn’t appear to consider it an issue.

He stressed that the sticks could not be illuminated as that would definitely be illegal.

SDS doesn’t allow for the use of radios and years ago asphalt Modifieds had mirrors going totally across the top of the windshield opening.

Sticks are apparently adding another dimension to racing

One veteran driver noted that if he took his eyes off the track to look for a signal stick pit crew member that he would probably end up crashing the car into the wall.

However, these aren’t anything new as Late Models and UMP’s have used them for years.

They are just another addition to dirt track Modified racing.

In fact they are probably one of the cheapest investments in the pit mule.