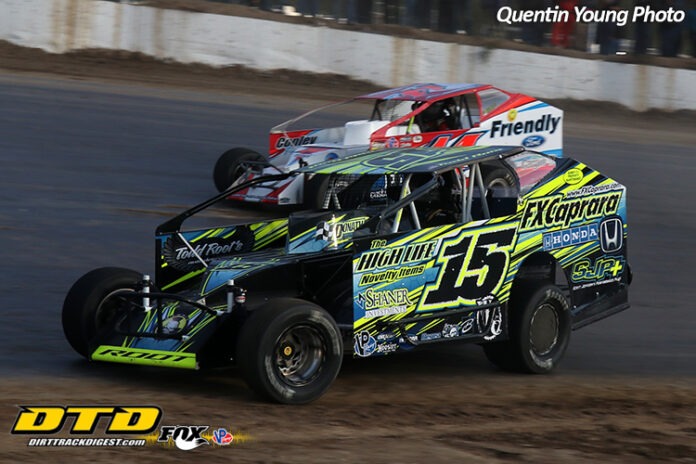 The transition from Sportsman, to 358 and now to big-block Modified has been rather quick for Todd Root, but when the 2021 Central New York season commences the racing veteran will be seeking a new challenge.

Root said, “An opportunity came about with an engine deal with Brian Donath, who has done all of our engines from Sportsman to small-block and now big-block. FX Caprara Honda, who has been with me since my go kart days will be on board and we are currenting seeking other sponsorship opportunities.”

Along with a big-block, Todd said, “We have a brand new 2021 Bicknell to run with the Donath Motor Worx power plant.”

Plans are, according to Todd, “To run Brewerton weekly with the big-block and as many local Super DIRTcar Series shows as we can and possibly special shows with a small-block.”


In the Sportsman division he was successful and reflecting noted, “We only ran that class for a few years, but finished second in points at Fulton and Brewerton. However, we had 17 wins in three years.”

He then shifted to the 358’s where he initially faced some frustration, but things evolved.

Looking back he explained, “I really feel mainly the lack of funding to be able to compete at the highest level of competition held us back when we first moved up.  I feel we made big achievements such as qualifying for big races, a lot of top fives and a win all in two years (not including 2020).”

He feels he’s ready for the next challenge and said, “The obstacles we might be going to face going from 358 to big-block are being able to get the car consistent now that we have 800 horsepower to hook up. The toughest part of moving to the big-block though will be the expense and the competition, but we are looking forward to the challenge.”

So add Todd Root to the big-block roster for the 2021 season and anyone who has watched him in his career know how determined and competitive he is. There is no guarantee of success, but given the right tools Root could be one competitive driver.