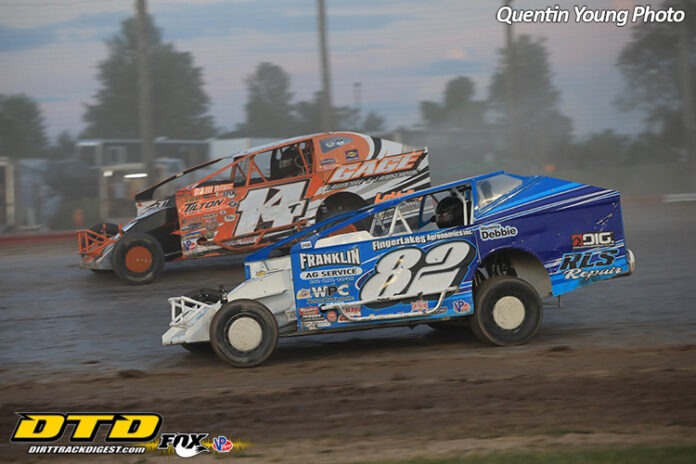 After over six decades of racing veteran Modified driver Roy Shields passed away last year, but his grandson Will Shields will make certain his grandfather’s presence remains on the dirt tracks of Central New York..

Roy Shields has been a loyal supporter of the sport for a long time.

In fact, Will said, “My grandfather raced for 62 years. He ran his first race when he was just 15-years-old and his last one when he was 77.”

This season is a new adventure for the King Ferry driver as he said, “I will be running the 82s this year. I’m really excited to run my grandfather’s car. We were putting it together for him to race at Thunder Mountain last year. We were almost finished with it when he passed. I’ve always wanted to drive for my grandfather, but he wasn’t ready to give up the steering wheel. He always told me ‘As long as I can still get it in I’ll keep racing’.”

So his move to the top level of Modified racing for 2020 has been set.

He said, “My grandfather was my greatest inspiration. I’ve been helping in the garage my whole life. My grandfather taught me how to disassemble and assembly a Chevy small-block when I was around 10-years-old. When it comes to working on cars and scaling and setting up, my dad (Randy) taught me that stuff.”

Will explained, “I drove my grandfather’s Modified for the first time at what is now Outlaw Speedway back in 2014. After racing his car I decided I wanted to get a car too. We decided that with the budget dad and I had at the time it would be better off to run the Sportsman class and get some seat time. Now the opportunity has presented itself and I’m ready to step up to the plate.”

Will has had a substantial amount of success in the Sportsman when, in 2019 he was the Fulton champion, was second at Brewerton, 10th at Outlaw and chalked up 13 feature wins.

The 2020 season was just one of those years for all racers, but he said, “I raced at Outlaw on Friday night and had an up and down year. I finished fourth in points for both Sportsman classes at Outlaw and won five features.”

However, he knows the next step will be tough and in talking about moving up he said, ”I think the toughest part of moving up to the big-block will be, as an owner, financially. I hope to find some marketing partners and sponsors to help me make the swing to run Mods full time.”

Currently, Dig Race Products and his family are supplying the sponsorship for the 82s.

Continuing, he explained, “My team consists of my dad (Randy) and my girlfriend, Tori). Without their help I’d be a one man band. As far as goals, I’d really like to win a feature this season, but it’s also important to keep the car in one piece so that I can have something to work off in 2022.”

In regards to his racing calendar, Will said, “I kept one of my Sportsman cars so I can still run some special shows. The Modified has an open small-block to run the tracks utilizing the Short Track Series rules. I plan on racing select DIRTcar races and STSS races with the Sportsman. My schedule for the Modified is up in the air, but even though I would love to be able to run both series I have only an engine that allows me to run with (Brett) Deyo.”