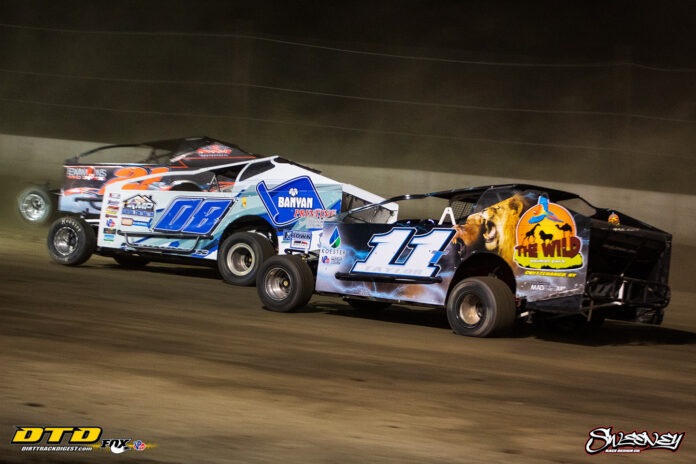 Former 358 and Sportsman competitor Jeff Taylor is among the latest drivers going big-block racing in 2021.

Taylor said, “We made the decision to go to big-block last year when we were running 358’s. The small-blocks don’t seem to have as many racing opportunities as the big-block so we decided to run both this year. We are looking to run a lot of races and get laps in to hopefully really improve.””

The team has two Bicknell cars which Jeff said, “They were barely used in 2020, that will be used for the big-block car.  We are looking to add a third car once the season starts. We will be running all Enders motors as they have been great to work with. Our primary sponsor will continue to be my businesses ‘The Wild Animal Park’ and ‘The Wilde Drive Thru Safari’ along with Montroy Development, Koester Associates, Tracey Road Equipment and CNY Sealing and Paving.” 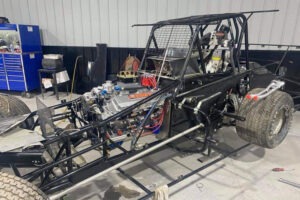 Looking toward the next step, Jeff noted, “Big-blocks are definitely going to be challenging given the talent in the field. Other classes seem to have a few really good drivers that dominate, but the Big Blocks seem to have so many good young and veteran drivers. It’s going to be a challenge. Also with the added power on slick tracks, that will be different. I enjoy heavy tracks and just putting the hammer down, but that doesn’t translate to good finishes as it seems more often then not the track slick off. However, I am excited for the challenge”.

Jeff found his way out of the Sportsman during a shortened COVID 2020.

He explained, “We did make the move up to 358’s last year and it was a lot of fun even though we were only able to run a limited schedule. I really enjoyed it and the 358’s seemed easier to drive than a Sportsman. It’s also nice to be able to get on the brakes if you have to and not always worry about being driven over. We had a handful of top 10’s and a second and third place finish at Thunder Mountain.”

Looking forward to his venture into the big-blocks, Jeff said, “I would say our goals are to really get a lot of laps, hopefully qualify for some big shows and some other decent finishes. With owning the zoo there really isn’t a lot of days off so racing gives me something to do in the evening just to have fun and relieve some stress.”

Ever since he started he has had a veteran Central New York Modified-Sprint car Gordy Button mentoring him.

Taylor said, “Gordy is still the leader of our team and recently retired.  He is putting in a lot of time into our racing program. I really look forward to working with him and improving as a team.”

Button is a perfect mentor for Taylor as he has a wealth of experience in Modifieds as well as capturing the Empire Super Sprint championship in 1983, 1984 and 1986. Ironically, the only year in that stretch that he didn’t win the title was captured by Jeff’s dad.

Jeff is the son of 1984 Empire Super Sprints champion Jeff Taylor while is uncle was Don McGee who was one of the original founders of ESS.

There is some irony for Gordy and Jeff being together as Taylor noted, “It’s funny that my father and Gordy were big time rivals in the early days of ESS (Empire Super Sprints) and to think now that Gordy does my car.  It’s ironic and funny.”

However, the older Taylor has made an impact as the current driver said, “His number was 11 and that’s why mine is. He’s will go to races, but I think he lost interest when he got out of it. He is very supportive of me. “

Unlike many drivers starting their career with racing under their belts, such was not the case for Taylor.

Reflecting on that he noted, “My racing career is fairly brief. I started later in life and have just four years experience. I always wanted to race as I watched my father race Sprint Cars as a kid, but never really had the opportunity. With the success of my business and the guidance and help from Gordy I was able to do something I always wanted. Starting with three years in Sportsman and last year the 358’s I hope to continue to improve. It was challenging, basically coming in not knowing what to expect, at times it was frustrating, but as we were able to get more races in I became more comfortable. I had a couple of seconds and was fortunate to pick up a win at Brewerton in 2019.

“The beginning was definitely a struggle, but even in my first year we had a few good runs. I wasn’t really aware of how much racing can be as far as a head game, but it definitely is. I think having some good races helped me build confidence and improve. But in the same sense, being disappointed and losing confidence also shows on the track. I think growing up playing sports and being competitive made it difficult coming in and not being successful right away. It was tough and managing my competitive temper was difficult, but I feel as though I have really worked on that and the racing benefits from it.”

“As far as our schedule we are planning most likely at Brewerton big-blocks on Friday, 358’s at Fulton on Saturday,” explained Taylor. “We also plan on racing a few Short Track Super Series races beginning at Georgetown followed by Port Royal and Selinsgrove in March along with some Super DIRTcar Series events.”

Taylor is waiting to go racing and obviously, not afraid of the new challenges that await him.