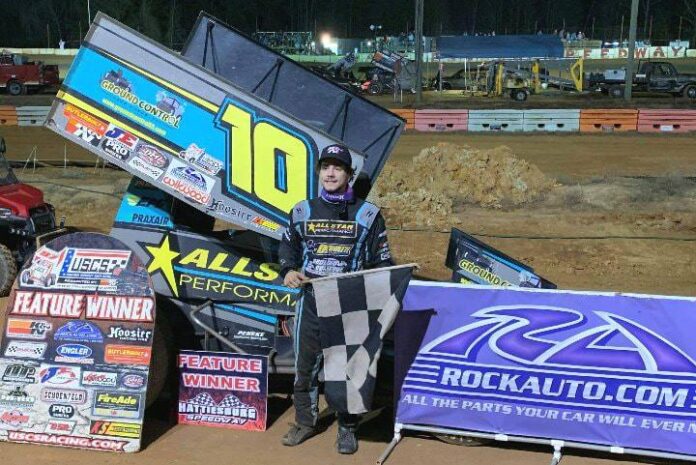 Nearly 1,300 miles from Cicero, N.Y., at the Hattiesburg Speedway “In the Heart of Dixie” Paulie Colagiovani celebrated in victory lane on Friday night for his first 360 win of the 2021 season.

Paulie told Dirt Track Digest, “It was a very exciting way to start the season with a win down south. I knew I had a good car so I just tried getting up front and getting through the lapped cars as quickly as I could.”

The United Speed Contest Sanction (USCS) show in Mississippi was referred to by the local paper as “the biggest event of the season” as the track commenced its new year.

For Colagiovani it has been a busy few weeks as he has been in search of the elusive first win of the season.

He had spent several weekends in Florida before continuing the USCS tour.

Explaining the tracks he said, “The tracks are definitely different from what I am used to up in New York. We raced at East Bay and Clewiston Speedway. We definitely learned a lot with the set up as we qualified for all of the features except for the All Stars (at East Bay).”

Clewiston is the “southernmost dirt track in the USA” while East Bay is one of those legendary tracks that has a ton of history.

The USCS fields provided numerous drivers that Paulie was unfamiliar with and he explained, “Yes I am not use to running against many of them and that sort of makes you think twice about passing someone. However, the USCS and ESS aren’t much different. They are both good series running for the love of the sport.”

The last time ESS ran a complete season it was Paulie Colagiovani being crowned the champion and he said, “I think that gave me a lot of confidence in going to future races.”

Looking back on the Florida trip the Central New York driver said, “It was a very fun trip and we learned a lot. I really hope to be going back again next year.”

So the team headed home after the scheduled show at Magnolia Speedway in Columbus, Mississippi was rained out due to rain two days earlier.

Paulie thanked his dad (Paul Coiligiovani), Doug and Barb Emery along with truck driver Doug Hoover for their efforts in helping him to be successful on this southern venture.

They headed home from Dixie with momentum that they hope to carry over as the regular season rapidly approaches.