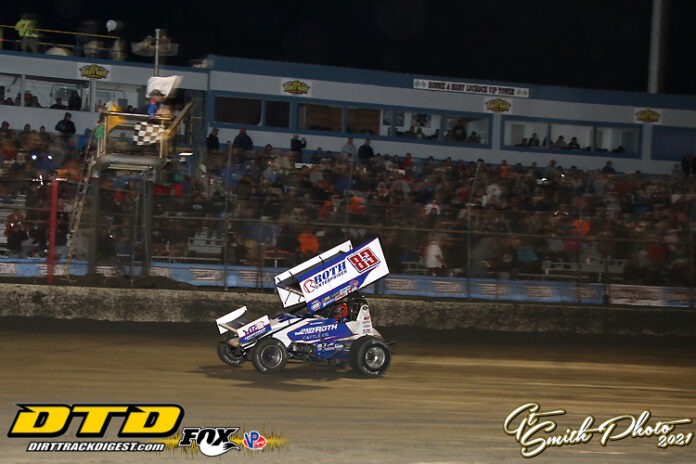 Those two words can describe the appearance of “The Greatest Show on Dirt” the World of Outlaws at East Bay Speedway just north of Gibsonton, Florida.

After being COVID-19 canceled out of the West Coast the World Racing Group officials scrambled to pull together replacement shows and one of those turned out to be a place where they hadn’t run since 1983, some 38 years ago.

Well, this was a home run replacement with a “standing room only” crowd for an efficiently run show that had people back in their cars in the parking lot before 10 p.m. (However, some never got moving from the parking lot until at 11 p.m.)

Twenty-five WoO Sprinters were in the pits joined by 13 DIRTcar UMP Modifieds.

It took a while to work the track in as apparently the tide was in. East Bay is just one of those places where if the tide is in the track stays slimy and moist all night. Strange as the track supplies basically no grip for the tires.

Brad Sweet said, “You feel a lot of moisture, but not a lot of grip.”

There are 15 regulars on the tour this year and also coming down for the two day swing to Volusia and East Bay were Corey Eliason, Justin Peck, Gio Scelzi, Brett Marks, Sam Hafertepe Jr., Brian Brown along with Terry McCarl while Florida provided Johnny Gilbertson, A.J. Maddox and Andy Cobb.

Brown, who will be running a true outlaw schedule this year, explained his presence and said, “There is nothing else going on in the country anywhere and I get to race. It’s better than sitting home doing nothing.”

Like any show that sets things up through time trials you have to wait for that moment to happen.

“The moment” is when 24 “you wanted the best” sprinters set up for the 35-lap feature event.

This third of a mile track was going to supply some interesting stuff. The track never dried, and instead of covering your eyes to see through the dust, you dodged clay pellets flying at you in all directions as the cushion was building up to an interesting high. I actually found out how shooting gallery targets felt throughout the night.

On the opening lap in turn two Jason Sides got around and Sheldon Haudenschild stood it up on two wheels as he also spun to avoid.

The restart was interesting as Brad Sweet and Aaron Reutzel were in the front row, but “The Big Cat” was put back to the second row as he allegedly jumped the start. That set up Donny Schatz and Reutzel.

On the green Reutzel slid across the front of the mult-time WoO champion and took off. He hit traffic quickly on the fifth lap. As fans were watching Schatz and Sweet dicing for second place in a wheel to wheel confrontation.

However, yellow came out again as Hafertefe spun in two thus setting the stage for another restart.

This one helped the two guys tied for the point lead as Logan Schuchart had started 10th and Carson Macedo 17th. They had been moving up and just before the halfway point Logan was battling with Schatz and Sweet.

However, the final slow down came on the 18th lap as Jason Sides flipped off turn two bringing out the red.

Schuhart’s momentum faded a bit while Macedo kept moving forward, going to fifth on the 27th, fourth on the 29th and third on the 32nd lap to finish on the podium.

Meanwhile, up front Reutzel was extraordinary running above the cushion on the high road all the way around. The speed, his driving style, the “no problem” with traffic on such a tight track and dominance left the fans awestruck. He won by a little less than two seconds, but it felt like he had simply run away from the field.

Early on the show was really in doubt as rain poured down on the facility overnight and up until mid-afternoon. There was a Sunday rain date, but the show went on. There was a slight lake in turn one infield, but the track was raceable.

Each Outlaw group got two sets of hot laps as the first one simply wasn’t going to cut it.

In time trials Eliason was the second from last car out, but turned in a 12.296 for the quick-time of the evening.

Heats were what happens with time trial and heads up starts with Reutzel, Sides and Zearfoss winning from the front row and pole sitters Sweet and Haudenschild got to the “fast cash dash” draw. The only non-front row driver to get to the draw was Schatz as he got Sweet on a restart on the low-side entering one after the yellow for the slowing Wayne Johnson.

The dash was sweet for Brad.

The mods were on hand and 13 started the feature which Brian Bernhardt won after a seven yellow, 25-lap main in which six cars finished.

Buzzie Reutimann finished second in his heat, but dropped out on lap seven. He had suffered motor problems the night before at Volusia.

However, the mods helped fill out the show and there was never really any down time with the exception of the draw for the dash (but that is part of the show) and the promotional fan participatory event.

So here we were in March in Florida and the Outlaws had returned about a month after leaving Volusia.

Will there be another East Bay outlaw show?

Who knows, but if the promoter leased the track last night he was probably on suicide watch today after the money that he saw come through the gate and get spent at his facility.

Long time fans always gauge the crowd by Lucas Oil Late Model standards. This, according to many, was well beyond Lucas Oil fans.

Dirt Track Digest photographer G.T. Smith got a picture of the stands an hour before opening ceremonies and they appeared full then. It only got bigger and bigger as the clock ticked toward the start of the night’s activities.

This appeared not to be a home run, but a walk off bottom of the ninth bases loaded grand slam.