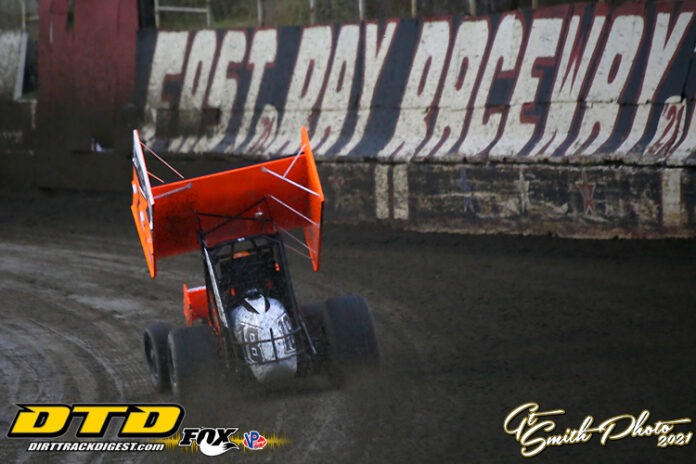 Whenever teams arrive at a track they go to their notebooks and pull out the appropriate sheet for setups for the night.

However, that wasn’t the case for many World of Outlaw Sprint Car teams as the made their first appearance in 38 years at the tide governed surface facility at East Bay.

Being just a few miles from the Gulf of Mexico, East Bay is one of the few tracks in the nation where you need to bring your tide chart when you come to race. The surface difference between “tide in” and “tide out” is significant.

Dirt Track Digest talked to a few of the teams prior to racing action on Saturday night.

It was early in the evening after a soaking all night and part of the day rain. Bobcats were milling around the infield and packers were doing a 200 lap feature on the wet surface.

World of Outlaw drivers walked up to the openings in turn one and two.  Some stood there looking while others sat on their mini four-wheelers. There was some conversation, but at this point, not much would be known.

Hot laps came up and four sets of Sprints practice sessions went to the track, but the surface simply wouldn’t give it up. So they all got another set and then ran time trials.

He wasn’t too concerned about adapting as he explained, “I do this for a living so I’ve learned a lot about this. Night in and night out we are on a race track. Here, the surface is sandy and there is a difference if the tide is in or the tide is out.”

Carson Macedo, in his new 41 ride, was ready to hit the track after a dominating performance at Volusia the night before.

In talking about the surface and new track, he explained, “Some 90 times a year at one point or another we are going to a new track and have to adapt. The race track is new to the others also and we just need to accommodate ourselves to the conditions.”

Aaron Reutzel, who found the high side that worked throughout the feature, noted, “This is an awesome track. If the tide is out it is different. However, it is tricky and usually a good track to race on. I’ve raced here before, but I don’t feel that really gives me any advantage over the Outlaws. They are just so good.”

Jacob Allen is only in his third year of Outlaw racing and had an interesting perspective.

He said, “I don’t worry about what everyone else says of the track. I don’t get caught up in that. I like to learn at my own pace and get my own perspective. I just take a look at the track and, even though we have no notes on the place, I try to find an experience I had at another speedway which is of similar shape and size.”

Sam Hefertepe Jr. has also run 360’s here in the past and said, “It is tricky and one of the hardest surfaces to get a hold on that we go to. It’s slimy and with the tides everchanging.”

Brian Brown also said, “It’s all about the tides here and there is a big difference.”

Like the others he simply said he would adapt to the surface as the night goes on.

And as always the Outlaws adapted.

They do this for a living and during the course of the night there was a yellow in the heat for Wayne Johnson slowing while two yellows in the feature and a red for a flipping Jason Sides.

A huge cushion had built up, the track remained (to the eye) slippery and wet, but the Outlaws put on the show you would expect.

As runner up Brad Sweet said, “I feel like there was a whole lot of moisture out there tonight, but not a lot of grip.”

Such is the story of East Bay.