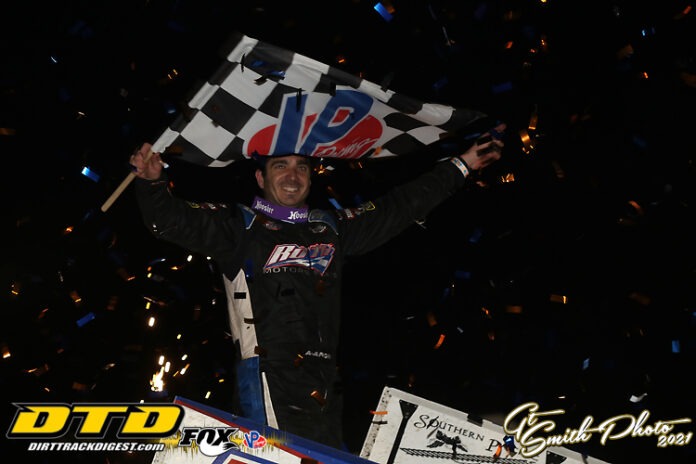 While many of the World of Outlaw drivers hadn’t been to the mysterious East Bay Raceway surface before, Aaron Reutzel had not only been there, but had won there.

In capturing the 35 lap Outlaw A-Main he chalked up his third track win with other victories in the ASCS and All Stars.

However, this one held a lot of meaning.

Talking with Dirt Track Digest outside of his hauler after the win Reutzel said, “The car was very good tonight.”

Of the start in the front row he said, “I just wanted to keep my speed up and minimize my mistakes.”

“Mistakes” were few and far between.  Once he favored the high-side everything simply seemed to go his way on the third of a mile.

Above the cushion was where he spent much of the race and Aaron explained, “I simply felt I could get a lot of speed up there and I was making less mistakes up there.”

He credited a racing hero from his younger days with helping him as he explained, “I watched videos on the way down here with Gary Wright and how he ran this track. He is a fellow Texan and had a big influence on me.”

Traffic appeared to be heavy, but Reutzel said, “I had absolutely no trouble with traffic whatsoever.”

That’s probably because he was up where absolutely no one else was running.

Of the victory for the Roth Racing Team, he said, with a smile, ”This is big, really big for us. I hope it helps the owners feel like they have made the right decision to have me drive for them.”

Continuing he noted this win wasn’t for him and said, “I feel good for my crew chief Don Buzwell as this is the first World of Outlaw feature win for him.”

He talked about the tricky surface a bit as before the night of racing action he said, “This track can be awesome.  If the tide is out it can be tricky. However, I don’t feel that running here before has given me any advantage.”

However, you have to think that running at East Bay previously gave him a little more background and notes from others.

Aaron Reutzel is chasing the Rookie of the Year title after coming off sensational efforts with the All Stars.

Of his new ride he said, “I was simply in the right place at the right time” and he is ready “to go with the flow” throughout the remainder of the 2021 World of Outlaw season.