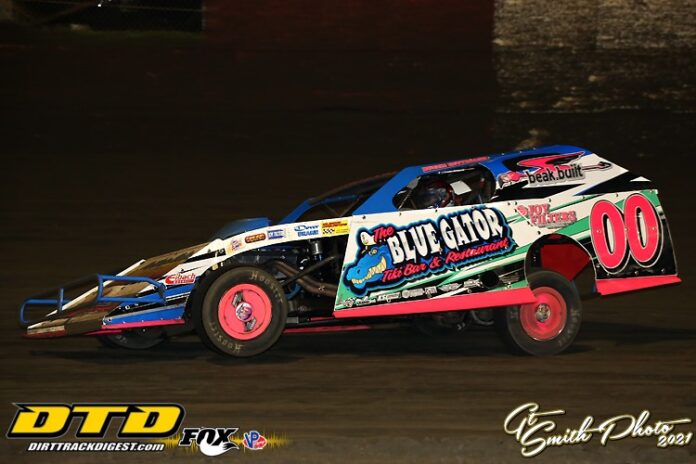 At 79-years-old the legendary Buzzie Reutimann continues to run the Florida Modified circuit on a regular basis.

On Friday night he captured his heat at Volusia Raceway Park and the next night as part of the doubleheader with the World of Outlaw Sprints he finished second in the preliminary. His luck in the main events wasn’t quite as good, but Buzzie continues to do what he loves.

Speaking with Dirt Track Digest the winner of the first Schaefer 100 at the Syracuse Fairgrounds mile talked about the sport and his lifelong involvement.

Continuing he said, “You hold your loved ones real tight and enjoy life.”

Talking about his age and driving future, Buzzie responded, “As I get older I know the time is coming when I have to give up. I’ve been doing this since I was 13-years-old and I’ll be 80 on May 7, but I am a young 79.”

Even though he enjoys it, Buzzie said, “Racing is a business. You are constantly changing and keep making things work that will go into the car. In four years I’ve never had the same setup in a car. You just keep changing things. Once you get it to handle you can have time to rest.”

Through the years Buzzie Reutimann has remained competitive and still continues to take home his share of checker flags.

However, winning isn’t everything as he said, “It is not that you have to win, but you need to enjoy what you are doing. I love the challenges.”

He is still a fan favorite and Buzzie appreciates the support as he noted, “I love the people. Race fans are different from fans in any other sport. When I was hurt at Syracuse the fans backed me and took care of me. It is like one big family. I always have loved putting on a show for the fans.”

It is quite evident that racing is a family thing for Buzzie.

At East Bay it was difficult to figure out where there was room for a car in the hauler. Walking through the weather protective screening there were foldable chairs, a food spread and folks sitting all around. This was “family.”

Buzzie was joined by his sister Joy as well as other folks including long time buddies “Jersey” and “Bob.”  Even though the guys were helping Buzzie way back “Jersey” worked along with Bobby Malzahn and “Bob” with Ray Cook.

Competitiveness and thrill seeking were part of Buzzie’s developing years.

Looking back at his family history he said, “My grandfather came over from Switzerland and would send money back home to get my grandmother here. He worked for the circus and jumped off a high tower into fire. My dad drove Sprints and Midgets. So I guess that is where I got it from.”

Buzzie had his DIRTcar UMP No. 00 ride at Volusia the night before he said, “We won our heat, but had motor trouble in the feature. You really have to have a big motor at Volusia and sometimes you can have problems there.”

At his disposal in the engine compartment are several choices as Buzzie explained, “We have a 377, 406, 410 and 425 and that last one was the one we had trouble with last night.”

East Bay saw the 377 as he said, ”It just fits this track. I’ve been running here since it first opened and with the tide out it is racy, but with the tide in it is wetter and the water keeps coming up through the track. However, I think they have it sealed up pretty good tonight.”

However, it wasn’t to be a good night and despite the second place in the heat, Buzzie pulled the 00 into the infield on the seven lap of the feature.

Buzzie Reutimann is simply one of those race drivers that when a fan was in his teens is still around to cheer for in 2021.