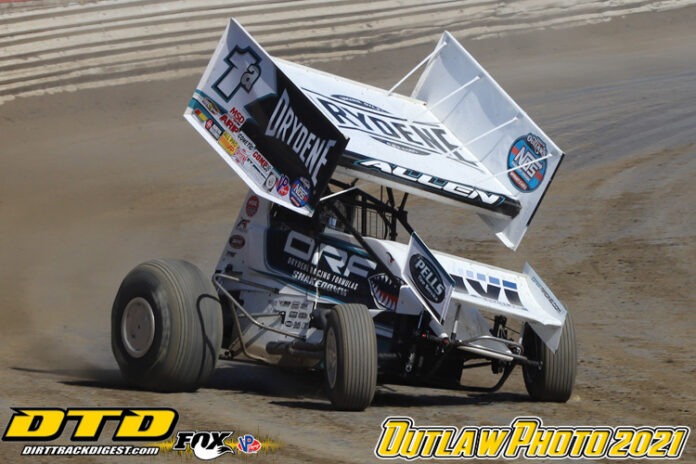 Jacob Allen might be slightly in the shadow of his nephew Logan Schuchart, but after getting that first win a year ago genuinely feels that he is part of the show.

He had been so close to celebrating in the confetti flying World of Outlaws victory lane, but the fickle finger of fate would find a way to give Allen ‘the bird’ and he would not get there first.

In 2019 he was one alp away from winning his first Outlaw race at Stockton when an ignition box failure made him a DNF.

However, that ended in spectacular style during the COVID-19 laden 2020 season on September 12 as he won his first race at Dodge City Raceway Park.

Reflecting on that win while talking with Dirt Track Digest at East Bay on Saturday, he said, “It means so much. It was the first and I had been awfully close before. You need to know you can start winning out there and it makes you part of it. Now it’s time to go out and win a lot of races. One of our top goals is to be at the top of the points and also to win races. I had not been accomplishing that.”

Though his dad Bobby Allen might be one of the original Outlaws and a legend, not only in Pennsylvania, but nationwide, Jacob’s story is a bit different.

He was successful with wins at Lincoln, Trail Way and Susquehanna.

Continuing he noted, “When I was 19 we went out on the World of Outlaw Tour. I was just a kid with not much experience on working or driving Sprint Cars. I had no idea about racing on a national level. Over time I matured and grew up. There were lots of times I was distracted and I needed to learn to go with it. Life changes you..”

He had always been interested in speed as that would be quite obvious in having Bobby Allen as your father.

However, he simply never really raced as a youngster.

When he would come to Pennsylvania for two months in the summer he said, “We would go go karting.”

Today he is a World of Outlaw winner and noted, “I went to school for engineering, but decided that I wanted to go with dad and Logan racing.”

The fan favorite team has come a long way in a relatively short time as Jacob said, “That first year we had no money and no equipment and I know how much this all meant to us and my dad. I am so proud of him.”

Today, Shark Racing is one of the contenders in each and every Outlaw show and Jacob Allen is now considered a contender whenever the two haulers pull into the pits.