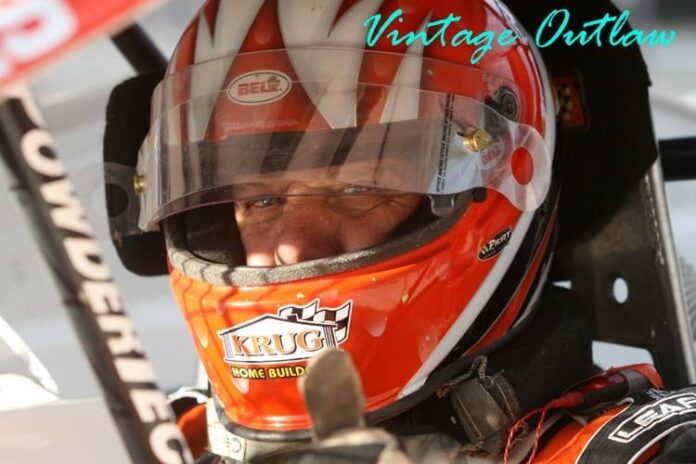 It has been several years since Jumpin’ Jack Johnson has celebrated in victory lane, but that doesn’t mean he has been forgotten.

Jack passed away last week after years of battling a debilitating disease, but his memory will be in the minds of racers and fans for years and years to come.

Several living legends shared their thoughts with Dirt Track Digest as everyone is coming to grips with his passing.

One of his biggest rivals was C.D. Coville and weekly battles at Fonda will long be remembered.

C.D. said, “I considered us good friends even though we wouldn’t exactly hang around. Jacks fans hated me and my fans hated Jack, but that isn’t how it was between us. He was a good friend. We were rivals, but we were also friends and could have a good laugh together.”

Continuing he said, “His son Ronnie was a good friend of my son and in Florida we’d give him a ride to the track.  I really feel I was one of his mentors.”

He continued, “Jack and I always joked around, but Jack and I were two totally different people. We would race against each other really hard at Fonda and Albany-Saratoga. We were always around one another on the track because of the handicap they use. We would start 17th and 18th and it would guarantee the fans an exciting show. We’d start deep in the pack, but always seemed to have a good finish.”

Racing was hard and C.D. explained, “I jokingly said to Jack that I should put some orange on my car as it seemed he would run low and I would be up high. We’d come up to a lapped car and the driver would see orange on his inside and move up the race track to give Jack room. With Jack and I we could run side-by-side and never have an issue. It was just the way it was.”

Jack helped C.D. win a major race as Coville explained, “When I won Eastern States the right rear tire I bought from Jack to use it in the feature. It was a Goodyear he had for Syracuse and I was able to use that same tire to win this race.”

He talked about that night in Jack’s garage and said, “I would stop at his place and there was this song that was popular that was in my head. We were both building new cars and it was spring. That song came on and at the same time we both said started singing it. Jack said he wanted to use a lyric on his car and I was thinking of doing the same thing. The line was “will it go round in circles,” and we agreed that whoever finished his car first could use it. Neither of us ever did as I think it was a bit of respect for one another.”

C.D. had high praise for his rival and said, “Jack was one of the great ones. He is one of the few who could get into junk and make it go. Sometimes there are good drivers who have good equipment, but Jack was such a driver that he could always get that extra out of a car no matter if it was good or bad.”

Billy Decker also had a strong relationship and his career was influenced by Jack Johnson.

Reflecting on Jack, Billy said, “He was a pretty dong gone good guy.”

Their relationship goes back a long, long way as Decker explained, “Jack use to hunt with us. In fact one time my brother and I brought him to a spot in the woods where there were going to be plenty of deer. We told him to stand there and when the sun came up he would be surrounded by deer. Well, we walked away, but heard the truck door slam so we went back. There was Jack in the seat. We asked him why he didn’t stay where we put him and he said, ‘If the deer are not going to be there until daylight neither am I.’”

Decker said, “Jack was a really hard, good racer and he was always fun to be around in the shop and garage.”

Billy’s career was impacted by Jack as he explained, “I started racing Tiger car six cylinders as Penn Can and Five Mile Point. Jack and my dad (Floyd) were good friends and he talked dad into building me a car for Albany. We would race Albany on Friday, spend Saturday in Jack’s shop and race at Fonda. It was really a generation that everyone in racing was close. They all hung around the shop and went to the track together. In fact, no matter where you went, Florida, out West or where ever, everyone knew Jumpin’ Jack.”

Gary Tomkins said, “Racing has lost a true legend. Not only was he one of the best ever, but he was one of the most down to earth people you would ever meet.”

Continuing he said, “Jack was one of my racing heroes. To me he was larger than life. Watching him win Syracuse in ‘79 plus many other races through the years was a thrill, especially with his relentless driving style. They say you should never meet your hero because you will be disappointed, but meeting and getting to know Jack, it was the exact opposite. He was one of the nicest, most down to earth people I’ve ever met. Whether he knew a person or not, he talked to them like he was their friend. That left an impression on me and I’ve always tried to be that way as much as possible. Getting a chance to help build cars for Jack and later on getting a chance to race against him will always be highlights of mine during my time being involved in racing.”

Tim McCreadie had nothing but respect for Jack and at the Fonda Jack Johnson Tribute Night a couple of years ago the Lucas Oil Late Model professional driver made certain that he would be there for that event.

T-Mac said, “I’ve never raced this race before, but I’ve always wanted to. My dad raced against Jack and I grew up around Ronnie. When he was 60 he raced like he was 20 years old. We all wanted to be like him when we got older. We are always racing the Late Model so I really wanted to be here if I could. I wish I could go more than just be here tonight as we are friends and we were always racing together.”

He noted that he also wanted to race this event as his dad and Jack were such close friends.

Modified competitor Dickie Larkin also remembered Jack and held him in high respect as he said, “He was a great guy. At the race track he was always helping me out when I couldn’t figure something out. He was never too busy. It was exciting to compete against him as he was one of the greatest.”

Canadian legend Joe Plazek talked briefly about Jack and said, “He was a good, hard driving competitor. If he got into you he meant it and you probably had it coming. Rest in Peace Jumping Jack.”

Veteran Modified driver, owner, track operator and former Super DIRTcar Series Director Mike Perrotte said, “Racing with Jack for so many years at Albany-Saratoga are certainly some of my fondest memories in racing. Jack was a class act and was the guy that everybody in our world wanted to be.”

Johnson may be gone, but he was be remembered fondly by all who knew him.  He is a legend that will live on among the legends of our sport.