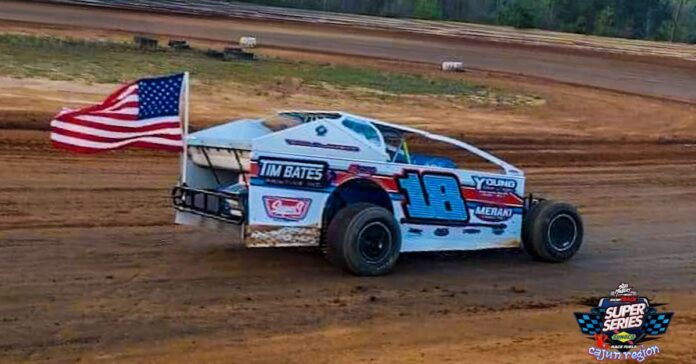 Hopefully, in years ahead the big-blocks will be as familiar to fanatical Louisiana, Arkansas and Texas race fans as the Modifieds are to folks of the Northeast.

History will show that Cody Robbins came from his eighth starting spot to capture the inaugural Cajun Series win and was joined on the podium with runner-up Tommy Rascoe and Caleb Dillard.

As he was headed for a flight home, Dirt Track Digest reached out to Cajun Series founder Brett Deyo for his comments of the initial race and his reasons for creating a new Modified area.

DIRT TRACK DIGEST: A year ago the Short Track Super Series Cajun Region didn’t exist. What are your thoughts of the first series show?

BRETT DEYO: “I was very, very pleased with Saturday’s opener. Last year, the first Northeast-style Modified race of the year at Chatham drew three cars. This year, we had 14. That is about a 500-percent growth rate! There were a few other drivers who didn’t have their cars done or had engine trouble at some local practice days, so that number will be going up. It was an excellent start for the series.”

DTD: Why do you think 14 drivers changed their class to run with the Short Track Super Series?

BD: “I think the class is a nice fit for the area. Talking to local promoters down there, the Super Late Model numbers have dropped off significantly. There is almost a void for a “headline” type class. There are Limited or B-Mod divisions there, Crate Late Models and the Factory Stock class is huge in Louisiana, but our cars are still relatively affordable and they are a headliner. We put together a purse structure that is very strong for that region: it is $1,000 to win, but second pays $750. Green money is $200. That is leaps and bounds higher than other divisions and groups in the area, so the average racer can afford to do it.”

DTD: What did it take to put this together?

BD: “A lot of time. I first had to learn the tracks in the area, who the promoters were, what they could afford to pay, and put together something that works for everyone. I spent a lot of time getting to understand racing in the area. Brandon Hightower got it started last year some, but he was also trying to race and move north. His plan is to race up in the Northeast all season. Tim and Chris Bates have been a big help. They know the people and the tracks. They will be our series directors down there. I went down in November for our combined races, then went back in March for a competitor meeting and I was there again this weekend for the opener. I want everyone in Louisiana and Texas to know I am committed to making this a success. It’s not just something I am throwing my name on.”

DTD: Are fans receptive to the Short Track Super Series?

BD: “Yes! We have gotten a tremendous response so far. Honestly, our apparel sales Saturday at Chatham were right there with some of our bigger events here at home. We are starting to pick up some drivers who are known in the area for their successes in other divisions. They are bringing their supporters to our program as well.”

DTD: Are you running the same format as the northern Short Track Super Series?

BD: “Yes we are. Drivers draw for their starting positions in heat races and top finishers redraw for the feature. We are running shorter events down there. Heat races are 8 laps. Features are 20 to 25 laps.”

DTD: Why do you think there is a market for this? No one has tried to expand Northeast Modifieds since Glenn Donnelly took the Modifieds to Texas.

BD: “Last year, the Short Track Super Series took a lot of pride in being the series that wanted to race despite COVID regulations. That took us to Maryland, North Carolina, South Carolina and Louisiana. The general consensus from the tracks that hosted us and the fans was how much they enjoyed our cars and the racing they provide. I believe our Modifieds are some of the coolest cars in the country and don’t need to be confined just to the Northeast. Louisiana and Texas had some cars already. We are organizing the division and promoting its growth.”

DTD: What is the first-year plan for the series and do you see interest from different venues?

BD: “It is a crawl, walk, run plan. We need to get stable, prove there are enough cars to put on a race for the fans and allow to promoters to sustain us financially. Jerry Hobson at Chatham was the first promoter to get behind the program and booked three dates right away. Since then, more promoters and tracks have jumped on board. I still have a few tracks taking a wait-and-see mentality and watching us closely. I think a target number events for this program is probably about 15 races once we are established. In November, I have rented both Ark-La-Tex and Chatham speedways again for the combination events with our series up north, headlined by the $20,000-to-win race at Chatham. I believe those events last year helped to push the growth of the class.”

DTD: Have you been able to get support in the region?

BD: “Yes! Dan Hamilton is the owner of Day Motor Sports in Tyler, Texas and he has been a tremendous asset. He is our American Racer dealer and a sponsor of the series. Tim Bates of Tim Bates Painting pledged $3,000 toward the series point fund, which is incredible. Kevin Hightower put up $75 for every event to the highest-finishing driver with an APE Engines decal on their car. David Forbis has pledged Hard Charger Awards during the season. There are a lot of people wanting this series to work. It’s a great team.”