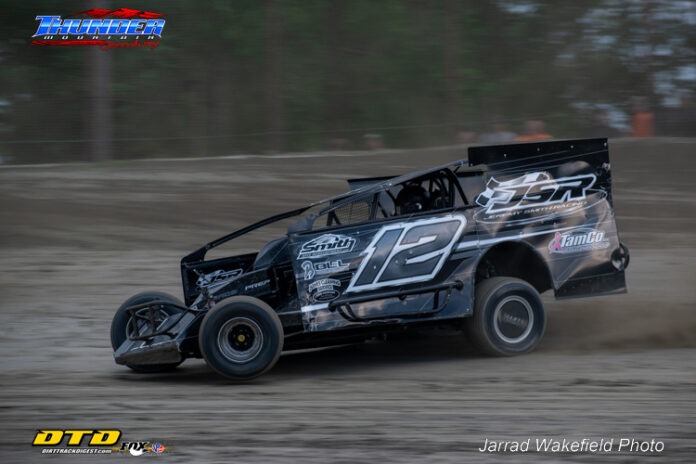 The Mike Colsten Memorial at Thunder Mountain on Tuesday night certainly presented its share of surprises as relative Modified newcomer Darren Smith appeared to be ready to settle for second place only to find himself in victory lane.

Matt Sheppard passed Jeremy Smith’s son with about 10 laps to go as just after taking the white flag something appeared to break in the rear end and he got turned around by a lapped car.

Suddenly, Smith was in the lead and seconds later he would be celebrating his first Modified win and earned himself a check for over $5,100.

Talking with Dirt Track Digest later in the week, Smith was still excited.

His dad has fielded Mods at Thunder Mountain for many years and not only did Smith win, but teammate Billy Decker was right there in second place for a Smith Racing sweep.

Darren was overjoyed at winning at this specific track and said, “It felt great to win at Thunder Mountain. It’s always special to do good here because of all the family and friends that come to support us because is it so close to home.”

Continuing he said, “It meant a lot to me, of course. What meant more to me is seeing everyone in victory lane and all the support I have from many great people. Also knowing that all the hard work by the crew guys paid off. Jarod Haus and Teddy Keener work hard all week to get the cars ready and then at the track they work on them as well as they are working on two cars. To see cars finish first and second is a huge testament to the crew.”

Early on Smith was leading and explained, “I was just trying to be consistent, hit the right lines and once I got into lapped traffic it was hard for me to pass.”

Sheppard pursued him and eventually went past as the eventual winning driver explained, “Sheppard took me to school and gave me a lesson on how to get through lapped traffic.”

After Sheppard went around he knew it wasn’t over. Looking back at the closing lap he said, “I was excited knowing I was back in the lead, but that excitement went away quickly because there was still a lap to go and you know there’s a pack of dogs behind you. I had to be focused up quick. I told myself that if there was ever a time to lay down a good lap right now was that time.”

His small-block held its own on this night and Darren is gaining confidence as he said, “This is the first year I’ve run consistently in the Modified class.

Throughout the past few years his dad Jeremy along with Billy Decker have been a pretty formidable team.

Smith is anxious to keep things going well and noted, “My best finish prior to this was two weeks ago when I ran second at Afton.”

However, he picked a good time to chalk up his first win. The money was one of the biggest pay days of the Thunder Mountain season and  Smith and his 2021 Bicknell are guaranteed a starting spot in Fulton’s Outlaw 200 at the end of the season.