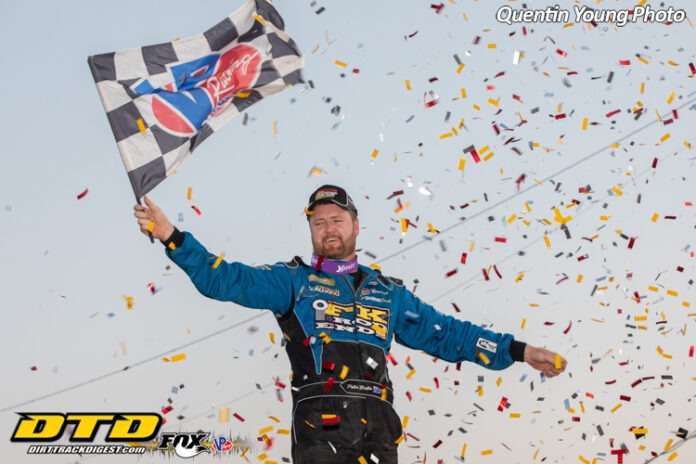 Peter Britten started outside front row for the first Super DIRTcar Series 60 lapper on Wednesday night at Canandaigua’s Land of Legends Raceway.  After taking the lead from Tim Fuller on the eighth lap the Pepsi sponsored car proved to have more than enough carbonation to outdistance a stellar field.

When the dust had settled and Britten was standing in victory lane he could look back at the 9.5 second win with complete satisfaction.

The last time the lone Australian driver in the Super DIRTcar Series field celebrated with the checker flat was nearly four years ago.

Peter said, “It has been a long time coming and to win in front of my hometown fans is nice. The last time I won a Super DIRTcar Series was at Sharon in 2017.”

Reflecting, he said, “I feel we are doing pretty good this year. We’ve been building up to this. Overall, I feel we are going really good. I have managed two series runners up and a few top fives. A podium is hard enough to do, but to win is tough.”

Continuing he explained, “Winning here at Canandaigua is especially tough as Matt Sheppard is just so good here.”

Of the race itself, Britten noted, “It was a smooth track tonight as I really didn’t have too much trouble with traffic. Getting a win any time is great, but we’ve been building for this and we must be doing something right.”

When asked, “Why tonight?”

He smiled and simply said, “Why not!”