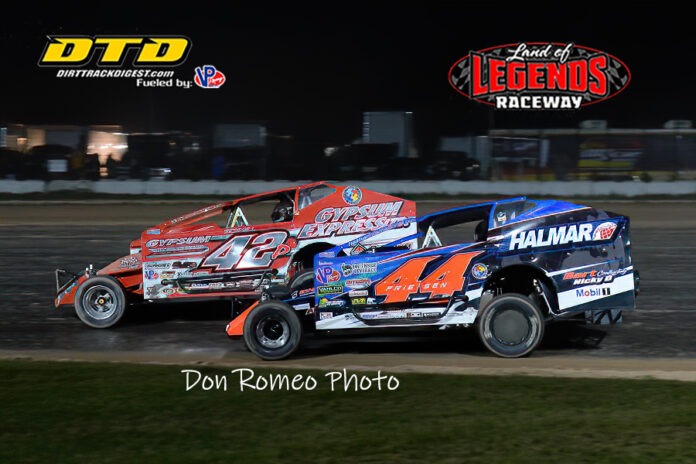 In August of 2005 Stewart Friesen won a feature at the Land of Legends Raceway, but it took another 16 years before he did it again.

Starting on the front row of the second Super DIRTcar Series 60 lapper he chased early leader Mike Mahaney for a dozen laps, but lap 13 proved to be the lucky one as Friesen went to the front, and despite a yellow that erased a 5.7 second lead, he went on to win by nearly five seconds.

With curfew threatening there was only time for one question by the trackside team and when he returned to the pits he talked with Dirt Track Digest about the night.

Stew said, “It was a great car. We changed a lot of stuff after hot laps and we hit it right on the head.”

He dominated the race and the only potential difficulty he could have had was lapped traffic, but he said, “There was quite a bit of dirty air when I was around them, but I simply maintained the speed of the lapped cars and was able to pick them off without any difficulty.”

In the first feature he thought he had a shot to win, but explained, “I had the best car I have ever had here and clipped Justin (Wright) and got a flat tire.”

In the opening main the yellow came out for the 44 and he headed to the pits for a new shoe.  He returned in the 29th position and on the 39th lap had worked himself back into the top 10.

On the final lap he moved to seventh to salvage a decent run.

In talking about the lengthy drought at Canandaigua he said, “I’ve been here a few times, but struggled. Tonight I jus kept the tires under me and it was smooth sailing.”

As always Freisen credited his crew with the efforts they put in to provide him with a highly competitive car.