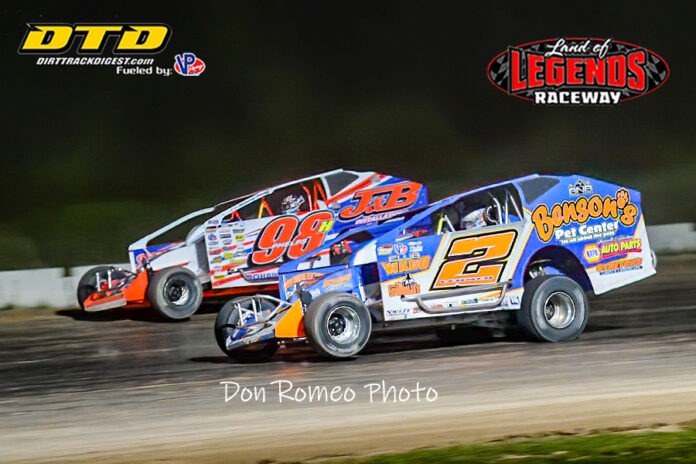 Little did Jack Lehner realize that a fourth place finish in the last chance race would result in what had to be one of the greatest drives of his career at the Land of Legends Raceway in Canandaigua on Wednesday night.

Lehner, a Super DIRTcar Series tour regular, had to use a provisional to start the first 60 lapper as he followed Alan Johnson, Gary Tomkins, and Daniel Johnson across the line in one of the two last chance races.

Thus, there he was lined up 25th and who in their wildest imagination could have ever foreseen the 2L in fifth place when the field crossed the line under the waving checkered flag?

As he stood in his trailer receiving congratulatory messages he was all smiles.

Jack said, “You can’t help but to get a good feeling. This wasn’t expected. In fact we made changes and thought we would use them in the second feature. The race started and the changes appeared to be working and the car was rolling pretty good.”

He went from 25th to 20th in five laps and the just started to pick off cars one by one as he was up on the racer’s edge. While some of the cars he was passing appeared to be almost standing still, he was dominant with his decision to run not only the middle, but the top along with an occasional trip to the bottom.

By the 50th lap he had worked his way to fifth and in pursuit of Jimmy Phelps. He tried several times, but was right in line as runner up Tim Fuller, Erick Rudolph, Phelps and Lehner were all battling for what could have been any combination of a finish from second through fifth.

Jack explained, “I really didn’t know what I had, but when I got past Mahaney and saw Matt Sheppard it was something. I ran down the passed Sheppard and I thought ‘we may have something here’. It was awesome.”

Continuing he said, “I had burned up the tires by the time I got to Jimmy (Phelps).”

He matched his previous best finish of fifth place in a Super DIRTcar Series show, but this one was much different as he said, “I started on the pole at Albany-Saratoga and led three-quarters of the race, but this was so much better.”

A few weeks ago Lehner destroyed his car at A-S and he thought he might give up racing weekly to run the tour.

However, he said, “Most of my major sponsors are from around Albany-Saratoga and I feel I need to run there weekly and will continue to run the tour.”

Yes, his right rear was trash when he parked it at his hauler, but it held together long enough to provide the Ginja Ninja with a career night that will be remembered by many who had the opportunity to witness one of his greatest runs.