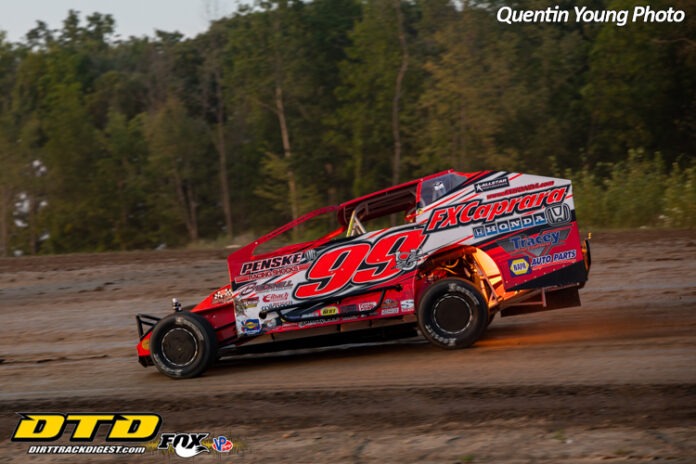 Just two night before standing in victory lane at the Brewerton Speedway, Larry Wight was violently barrel rolling down the front straight at the Land of Legends Speedway while other cars flew off and over the out of control 99L.

However, less than 48 hours later Larry was in a rather hard to get place for 2021 at the Brewerton Speedway as he captured his first big-block feature of the season at the Route 11 ‘D-Shaped Dirt Demon.’

Despite leading the points Larry has been unable to pick up a victory at his regular Friday night haunt.

Speaking with DTD afterwards, Larry was upbeat despite what had happened two him just two nights earlier.

Looking back at the past couple of days he said, “Hah, it’s been rough. We’ve been struggling all year. We’ve been a top five car, but we just were not a first place car. Everywhere we go we get thirds and seconds, second place here two weeks ago. We just could never get that win and we’ve been trying everything under the sun on these cars. I think we might have found something at Canandaigua in the first one, but in the second one everything went upside down.”

Talking about rebounding from his accident on Wednesday night and what his team has been doing to get back into action, Larry said, “Brandon (Ford) has just been breaking his tail along with Jake (Petrovich) in the shop. Fortunately, we had a car in the shop that was a new frame that was 50% put together and it was a mad dash to finish it up. I had to come in after work to put all the shocks back together and get them straightened out. Really, we looked at our notes and saw where we were good and where we were struggling. Brandon and I put our heads together tonight with something just a little bit different and for the conditions we had it worked. I am not sure they will work every night. It is a step  in the right direction for us.”