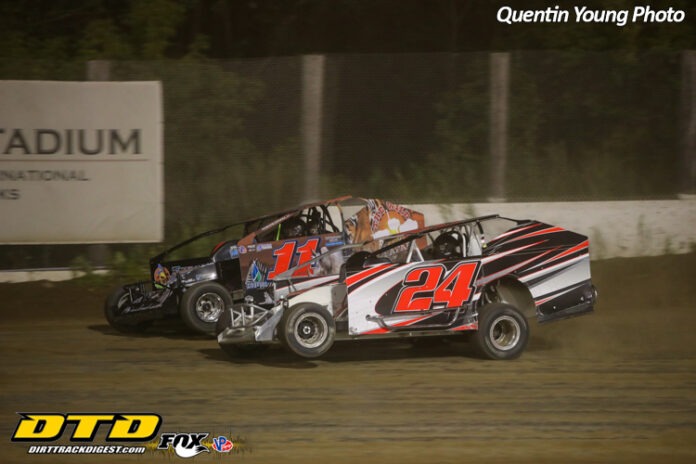 Sometimes the feature results aren’t exactly as predictable as the grandstand experts might think.

Such was the case at the Brewerton Speedway on Friday night as big-block Modified point leader Larry Wight won his first of the year, but there were some unexpected moments as Jim Witko and first year big-block driver Jeff Taylor had a heavyweight battle for second and third.

Witko runs just one race track with his big-block as he travels north on Route 81 every Friday night with his lone crew member, his wife Barb.

Taylor worked through the Sportsman division and, with mentoring from veteran Gordie Button, has found himself running with the big boys. Together these guys put on one hell of a show on Friday night.

Wight explained things can change and have by saying, “This track is so racy right now that the guys you would typically fall back aren’t falling back and they are staying up front.”

Taylor led the first 15 laps and then was relegated to second by Lightning Larry, but Witko was within striking distance throughout. As the 99L gained breathing room, no such thing happened between Taylor and Witko.

On the last lap Witko got under Taylor coming off the fourth turn and earned runner up by seven hundredth of a second.

But it wasn’t over as they came together crossing the finish line with Witko being turned around and up against the first turn wall while fifth place finisher Ronnie Davis III with nowhere to go ran into the idle 24 of Witko requiring a tow truck to take him off as a tire, rim and shock needed to be replaced.

Pit side, the usually mellow and calm Witko stormed out of his car, but never made it out of his pit.

Later he told DTD, “I’m aggravated. This was the best car I have ever had and I have never been dumped after a race. Alex Tonkin and I put our heads together to come up with this set-up. We put the changes together last night. This was really good tonight. However, I’ve got some left from damage. We scaled it at Alex’s and now we have to figure it out again. These coils have frustrated me, but tonight everything was perfect and I felt like we had a winning car.”

Taylor had mixed emotions about his third place finish and told DTD, “I’m okay with third, but I feel I gave away second by changing up my line, but that’s the learning part of things.”

In his tangle with Witko he explained, “At the end Witko rally roughed me up on the backstretch with a couple laps to go. Then on the final straightaway he was dooring me as we raced to the line. Honestly, I’m not happy, but I didn’t wreck him on purpose. I just stayed on the throttle trying to hold him off. After we crossed the line he slowed right down in front of me and I really couldn’t stop fast enough. I’m not saying I didn’t want to give him a slight tap for all the contact he was making with me, but by no means did I mean to push him off the track. I’m not sure why he didn’t carry some kind of momentum through like Larry did. I locked my brakes up trying to avoid him, but I think I was hooked on his car. Then when he came around the track backwards I had to go off road through the infield because I thought he was going to hit me head on.”

However, Taylor concluded by saying, “Overall it was a good night and our best finish in a big-block. Lapped traffic didn’t help, but that’s racing. I’m just still learning and I’m trying to limit my mistakes as I don’t want to wreck anybody.”

So fans had a wild time watching two of the guys who battle, battle and battle, but sometimes late in the race find themselves fighting to remain in the top ten.

It was their night to shine and gain attention.

And that they did.