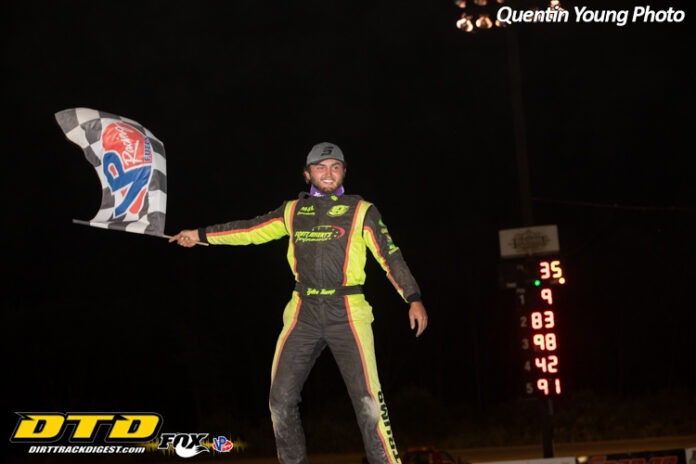 At 21 years of age Lacona, N.Y., driver Tyler Trump knows that every Friday night at the Brewerton Speedway he will be facing an uphill battle.

Entering last Friday, Trump had just two top five finishes to show for his credit, and with the misfortunes that the team has faced in recent weeks, he probably wasn’t high on the list of potential winners.

However, Trump made his racing great again on Friday night asTyler, in his second year of big-block racing, outdistanced Tim Sears Jr., Jimmy Phelps, Pat Ward and Billy Decker in what was a 2.1 second victory.

Trump has started on the pole, but was penalized on the initial start and set back a row. It wasn’t until the 17th lap when he took the lead for good, and with the yellow flag remaining in starter Scott Hixon’s holster, it eventually was a solid, genuine winning drive for Trump.

He really didn’t know what to expect in coming into action on Friday night.

He said, “August has been terrible for us. We’ve had rear end problems, transmission problems, had the wrong setup, and had a right rear tire go away on us. I guess that bad luck allowed us to start up front.”

Continuing he said, “We’ve made a lot of changes this past week with the help of Scott Jeffrey. He helped us and told us what to do. I just wanted to stay on the bottom tonight.”

Of the winning pass after a mid race yellow Tyler said, “I had tried some different things, but I was able to get past Kevin (Root) and Pat (Ward) on the restart. After that caution there just seemed to be a bit more bite in the track and I was getting a good run off turn two.”

Tyler said, “This feels simply amazing to be able to win against all of the experienced guys who race here every week. Some of these guys have raced here for over 20 years and it is amazing that I was able to win against them. I had won a 358 race at Fulton two years ago, but this is so much more exciting.”