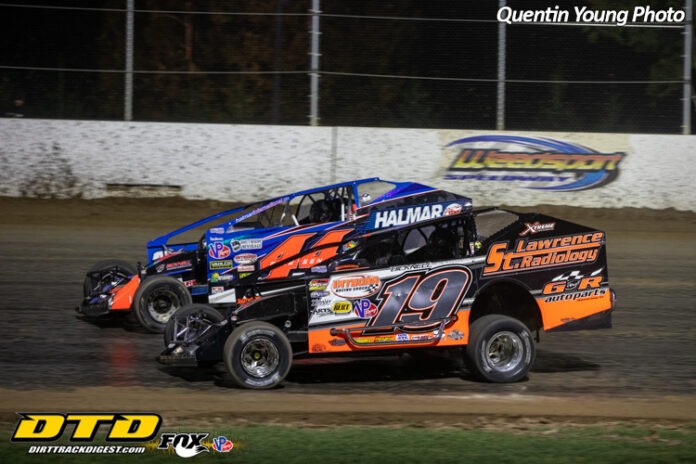 Sometimes events just don’t live up to the hype. It happens.

Not every racing event lives up to expectations.

There is no doubt that the Cavalcade Weekend at Weedsport Speedway was going to be something special. Saturday the Super DIRTcar Series big-block Modifieds, the always competitive and exciting Pro Stocks and a Sportsman event were on the docket and the fields were more than acceptable.

Big-blocks brought all the names and nearly 40 cars were outside while nearly 40 Sportsman were on hand and a full field of Pro Stocks.

Early on there was a feeling that this might not be a highly competitive show for the featured division. There simply wasn’t much passing overall in the heats, but when you start heads up from time trials that is to be expected.

However, when Jimmy Phelps was interviewed for his fourth place heat finish he gave the impression that maybe this would eventually work itself out and there would be more race track for the feature.

Sadly, it just didn’t happen and the green to checker Super DIRTcar Series 60 lapper had bite on the bottom, but anyone and everyone who tried the outside simply didn’t have much success. Matt Sheppard handily won from his third starting spot while pole sitter Max McLaughlin came home second and Tim Fuller came from fifth to third.

Drivers worked hard for every single position they achieved as one driver told me before the main, “It’s a tough track and it will be tough to pass tonight, but I just want to finish.”

The Sportsman division also did a green to checker.

It should have been a Matt Guererri win, but once again there needed to be a mistake to benefit anyone. Matt led from the outset with front row partner Tyler Murray in pursuit. It appeared as the cars fell into a straight line that was the way they were going to finish. However, Keara Backus rode up the jersey barrier coming out of turn four and bent up her left front. Matt hit the brakes as he was directly behind. The bottom opened and Murray went to the lead and he came home with a half second win.

The Pro Stocks always prove exciting and the early going on the feature was highly competitive. Then a wave of yellows hit eliminating many of the top runners.  Scott Towslee surprised with the win.

Sunday was going to be a 100 lapper for the Super DIRTcar Series, a huge invitational for the Sportsman and the final point race of the Empire Super Sprint season.

Weather proved to be the story of the day and a weekend that might have been one of the top attractions of the Fall was a wash.

As noted, sometimes shows simply don’t live up to expectations. It is just racing.

Robbie Johnston saw a trail of liquid following him into turn four during a heat. Sadly, there was a hole the size of your fist in the base of the engine. It was his lone motor.

Roy Bresnahan had an interesting, but short night. First of all he was sitting in line waiting to go out for group time trials and he ran past me carrying a gas can and funnel. He was out of fuel while waiting to go back out. A short time later he was out for the night with a broken drive shaft.

Not many crunching crashes, but Jim Harbison was forced into the concrete coming off two and heading down the back straight sustaining probably the most damage of the night in the Sportsman division.

Charlie Caprara noted he had purchased a new car for his son Matt. The coil over set up is something that Matt needs to get use to. It was purchased from Brandon Hightower in Louisiana last week and it was race ready. Matt’s bar car was sold seconds after it was posted as Darryl Nutting from the eastern end of the state purchased it.

Erick Rudolph started seventh and finished sixth while Chris Hile started sixth, ran there for four laps and went to seventh the rest of the race.

Brandon Walters had a new ride and earned a spot in the draw to start eighth and finished 11th. It was the best SDS run of his career.

Larry Wight was a hard charger starting in 18th and finishing 14th.

Chad Phelps has shifted to Bicknell after a career of running Troyer. He picked up fourth in his heat and ended up 16th in the main after starting 15th.

Well it is on to the next SDS show this week at the Land of Legends and it is just another week and another show. So head out to the races and enjoy as the ’21 season is nearly over.