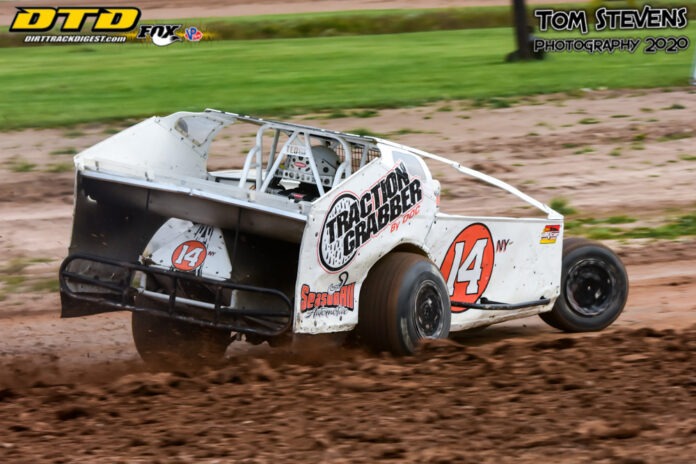 The “Johnson” name is legendary in Central New York and big-block Modified racing.

Danny and Alan have been putting on a show for decades, but there is another Johnson attempting to make his way in the sport that for many years was dominated by his dad and uncle.

Daniel Johnson has popped up at a variety of race tracks and this season while calling Land of Legends his home.

He said, “This is my third year and I feel I have been making good progress racing against teams with a lot more money than I have. I really feel I have been getting better and am 100% better than I was a year ago. It simply takes time to learn how to drive these things.”

Continuing he said, “I have watched my dad for more than 30 years and helped him. He shares experiences with me and I guess I can use his little ‘cheat book’ to learn about places. I have to admit, with him being my dad there is some pressure as people expect me to be him. I try my hardest.”

Johnson had a smile on his face after his heat run on Saturday night at the Land of Legends Gerald Haers Memorial.

In his first SDS race the excitement diminished quickly as he was caught in a violent three car flip on the front stretch in the opening stages. Reflecting on that he said, ”We had to replace the front clip, but we were back shortly after that,”

Johnson makes the most of what he has and explained, “This is an old Tyler Siri chassis. It’s a ‘14 Teo. My motor is 30 years old. It’s an old Gary Mann motor. It sat in my dad’s garage for five or ten years, we freshened it, blew it up and fixed it again.”

In his heat on Saturday he was running right up front and until a late race yellow bunched the field for a restart as he sat in a draw position. Looking back on that, Daniel said, “The guys who caught me had a $60,000 motor and mine if probably worth $10,000. I messed up.”

The feature didn’t go according to plan as Johnson was out in the early stages after bringing out the yellow.

He said, “The driver simply ran out of talent. I tried too hard and got a yuke tire.”

It might not have been the finish he was looking for, but you know Daniel Johnson will be back again as he attempts to climb the ladder of big-block Modifieds.