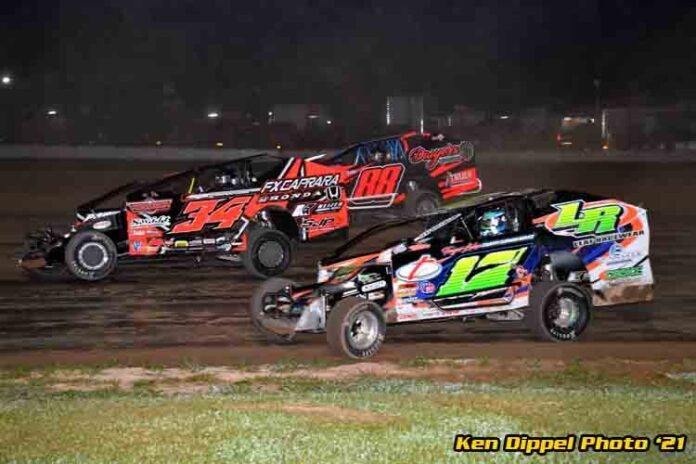 Marcus Dinkins is one of the little guys chasing a dream on the Super DIRTcar Series trail.

In recent years, the Watkins Glen, N.Y. based driver has signed up in the Platinum program and has taken to the tour.

On Saturday night he and his team displayed exactly why they belong to be running on the tour.

In the first heat of the night, starting far back in the field, he found himself in a precarious situation.

Marcus said, “I was going into the third turn and one car just slowed right down in front of me. I caught him with my right front and started flipping.”

The 17D was lifted high into the air by the tow truck and, for all intents and purposes, fans had to figure Dinkins’ night was over.

However, upon returning to the pits the damage, though extensive, was worth the effort to see if it could be repaired.

The car was up on jack stands as he and his crew swarmed and thrashed away.

Dinkins explained, “We needed to replace both shock towers in the front and get a new right shock. We also had a lot of cosmetic damage.  My crew did a great job and got it back together.”

After repairing the extensive damage to the front end they went to work to figure out how to handle the cosmetic body panels in the rear end. They worked feverishly and the effort paid off.

So out he went for one of the B-Mains, and five laps in, headed to the pits.

Afterwards he said, “I came in as I just wanted to take enough laps to see if the car was all right and it was.”

So starting in the last full row of the 29 car field by virtue of his Platinum status he reached nearly 90 laps and was sitting back in 20th or so when he brought out the yellow to end his night.

Alongside his mount afterwards, Dinkins said, “I just ran out of fuel.”

It had been a long night for the team, but there were smiles and pats on the back for the never-give-up attitude of all of the men and women who worked to repair the No. 17D and get it back on the Land of Legends race track for the Gerald Haers Memorial.