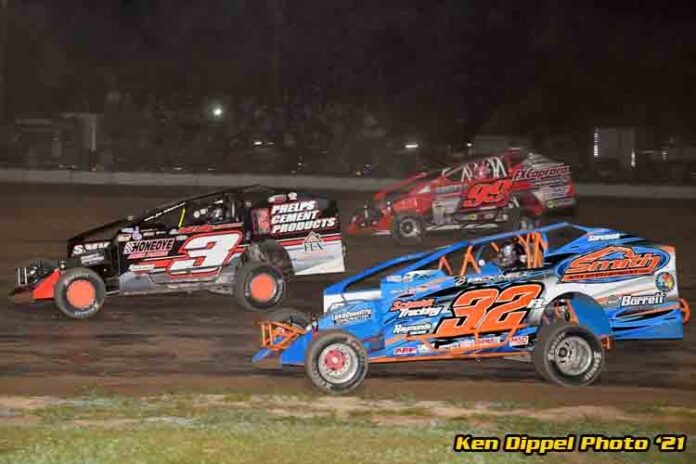 As Super DIRTcar Series races go, the Land of Legends’ Gerald Haers Memorial is a little more unique than the normal group time trials and lining up fast cars in front heats.

Since its inception, the Haers Memorial event has used 20 lap qualifying heats and this year the luck (or misluck) of the draw saw several top names in the back of their respective qualifiers. Forget the follow the leader format and watching drivers actually race for positions was crowd pleasing.

Heck, Matt Sheppard, Larry Wight, Tim Sears, Peter Britten, Tim Fuller and Jimmy Phelps were among the drivers that had to come from the back and this results in quite a bit of action on a very fast LOL surface.

With 45 cars in the pits it was perfect for 15 car heats in which six cars advanced to the feature while the others were relegated to the two consolations.

In the first heat the worst accident of the night saw Marcus Dinkins barrel rolling into turn three with a series of up and over flips. He was uninjured, but his crew did spectacular work getting him on the track for the feature.

Pole sitter Dave Marcuccilli won the first heat over Mat Williamson, Tyler Trump and Matt Sheppard while also getting to the main were Pat Ward and Larry Wight. Several times in the waning laps Larry and Pat got together on the front straight as friendships go out the door on the track.

In the second heat heading to the draw were winner Demetrios Drellos, Peter Britten (who started tenth), Tim Fuller (started 8th) and Max McLaughlin (starting 12th) while Justin Haers and Daniel Johnson got to the main.

Johnson was right up front until a restart on the 14th lap where he got shuffled back.

Billy Decker went from third to first by the backstretch of the first lap and outran Chris Hile. Erick Rudolph and Danny Johnson got to the draw while Ronnie Davis and Jimmy Phelps qualified.

The B’s for the big-blocks were crowded as four cars from each brought the starting field to 24 as Tim Sears and Brandon Walters were winners and also making the GHM main event were Jack Lehner, Jordan McCreadie, Steve Paine, Justin Wright, Kyle Coffey and on the last lap in the last turn Kevin Root went outside of C.G. Morey for the final spot. Morey was out of the feature by just over a tenth of a second.

Fuller challenged early and in the mid and later stages at times if appeared Billy Decker might have something for the 9s as the 91 Gypsum machine was working especially well between three and four, but in the end Sheppard ended up with a 1.3 second win.

Decker had come from fifth and the guy drawing fans attention was Larry Wight who was in his typical high line as he started 16th and was 10th by the 10th lap and fifth by the 31st before cementing third on the 75th for a solid, exciting drive.

Erick Rudolph and Tim Fuller were alone in fourth and fifth and completing the top 10 were Justin Haers, Peter Britten, Jack Lehner (from 19th), Mat Williamson and Chris Hile.

The heartbreak of the night was Ronnie Davis who started back in 15th and on the 90th lap worked his way to fourth. He and Wight were the lone two dancing with the devil on the high side of the track, but it was working for him.

However, a yellow with 10 to go saw Davis get a horrible restart and he went from fourth to 12th in just three laps.

There weren’t many serious incidents in the main, but yellows were scattered.

Marcuccilli was out on lap four when his battery died thus resulting in a 29th place finish.

Paine exited on the fifth while Daniel Johnson hit a yuke tire ending his night on the 15th.

Jimmy Phelps brought the yellow out on the 34th with apparent drive line problems.

Tim Sears Jr. had driven from the consi to ninth, but a drive shaft broke sending him to the pits with 40 laps to go. The 83x team has had two drive shafts break and two rear ends break sending him out of the SDS finishes.

Tyler Trump was running well, but on lap 83 he too had a drive shaft break.

The final yellow came on lap 89 when Marcus Dinkins ran out of fuel between three and four.

With only a two division show the Sportsman division had a highly competitive main-event  where Zach Sobotka led for 19 before getting passed by Matt Guererri with 11 to go. Zach stayed close, but fell five tenths of a second behind Matt at the line.

While the Sportsman division was on the track, someone was helping themselves to hundreds of dollars in the trailers as Chris Mackey, Matt Farnham,  Tyler Murray and Brent Joy were robbed.

Use to be teams could keep trailers open while on the track, but pit thieves have popped up in recent years and simply have taken whatever they please. It would be nice if security walks the pits during features keeping an eye open for situations like these. These four trailers were parked in the general vicinity of one another so it probably would have been obvious something was going on if someone had been watching. This is becoming all too common in all sorts of racing venues.

It appears that Sheppard is headed for yet another Super DIRTcar Series crown, but there are still some great Fall shows on tap as the Beasts of the Northeast head to Malta this Saturday night.

Any comments, notes, gossip etc. send along to foley395@hotmail.com