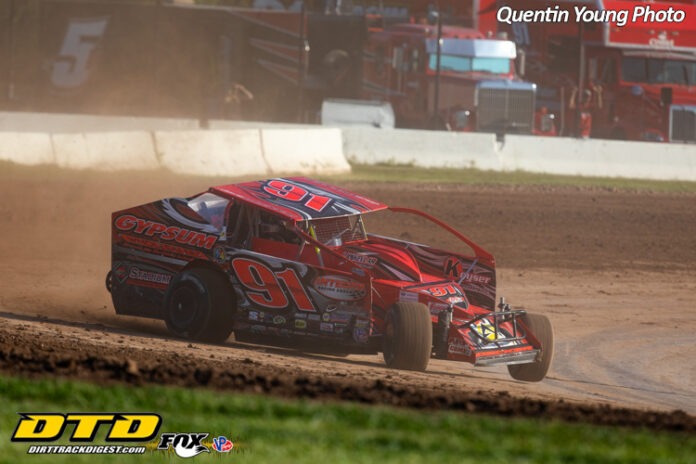 The 2022 Central New York and Super DIRTcar Series racing season will change dramatically for the Gypsum Racing Teams as owner John Wight has made a major decision that will impact every one of his teams.

Talking with Dirt Track Digest in the pits at the Land of Legends this past Saturday evening, the long time race team owner-promoter, disclosed a decision that has been rumored for quite some time.

Continuing, he explained, “I will be 73 next year and it is not as much fun as it was. The level of competition is high and we have not been competitive. At my age I want to see us win races.

“It use to be when the Big Red haulers pulled into the pits we would put fear in the competition, and that is no longer the case. I really had made this decision at the end of last year. We had a better year during COVID as Larry went to Land of Legends and ran good.”

In regards to his son Larry’s 99L team, John said, “I’m not sure at this time, but we will probably run weekly. I have little interest in following the Super DIRTcar Series next year.”

Wight said, “I am disgusted at how this year has gone and racing is now at a point where everyone needs engineers to be successful. Look at Stewart Friesen as he has got good engineers in place. We just haven’t been competitive and can’t consistently run in the top five.”

It would appear that Billy Decker will continue driving for Jeremy Smith in Short Track Super Series races and possibly elsewhere, but his successful stint with the Gypsum Wholesalers 91 will come to an end at the completion of the 2021 season.

John said, “Billy does want to race, but not at the level he is doing now.”

At this point it is uncertain what Pat Ward’s future racing plans might be, but he has run the Beyea 121 on a few occasions. What is definite though is that the 42p will no longer be running in the Gypsum Express stable.

Anyone pit side realizes the tremendous support he provides to so many teams in the pits including the likes of Chris Hile and Timmy Sears. He has loaned motors and even cars to drivers who have suffered misfortune at Brewerton and Fulton Speedways. John Wight has been generous, but has never sought attention or time in the spotlight for what he does for other teams. Racing to him simply hasn’t been the Big Red 91, 99L and 42p.

John said, “I will continue to support those teams we have supported.”

The Kevlar motor shop will continue and John said, “I will just keep running the race tracks. We had a great year at Fulton and Brewerton and I plan to continue to do so.”

He noted, “I really feel social media and the pay TV hurt attendance on a weekly basis,” but he understands the need to adapt and provide fans with unique, interesting shows.

By the end of the night at Canandaigua ,the Gypsum cars had put on probably the best overall combined Super DIRTcar Series event of the year with Billy in second, Larry third and Pat just outside the top 10.

Fans should enjoy watching the Big Red cars for the next few weeks, because when 2021 is gone so to are the familiar red 91 and 42p.