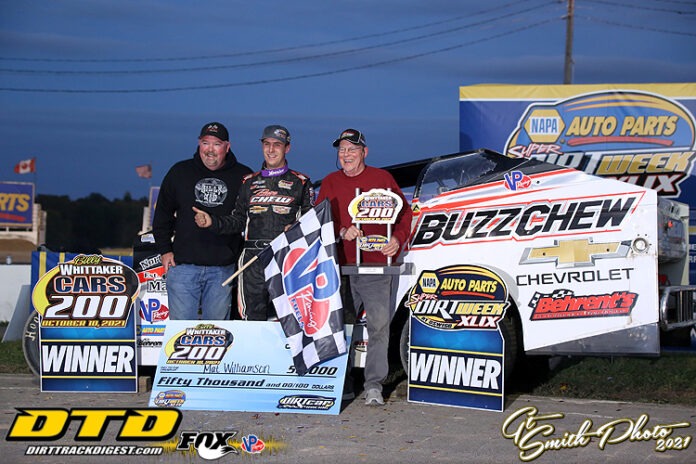 Mat Williamson joined an elite group of back-to-back winners in the grand daddy of all big-block Modifieds.

‘Money Mat,’ who won over $100,000 over an eight day period, capped off the tremendous achievement winning back-to-back Billy Whittaker Car 200’s in the Buzz Chew No. 88.

He joined Buzzie Reutimann, Gary Balough, Merv Treichler, Brett Hearn, Billy Decker and Stewart Friesen as only seven drivers have been able to achieve it.

Standing outside the DTD TV studio tent on Sunday night he talked about the meaning of winning by saying, “I just wanted to prove to myself that winning this race the first time wasn’t a fluke.”

He talked about his crew and said, “We had our heads down working all week long. I trusted what we did. I just hoped the shocks could survive. We knew we did everything we needed to do, but the key was being able to survive out there.”

Mat Williamson might not have been out there for the 200 except for a long discussion between his car owner Buzz Chew and 27 year crew chief Ron (Spot) St. Marie.

Chew explained, “We brought a new car this year and I was upset with the track conditions.  It really wasn’t anyone’s fault. Things happen. I did not want to take the car out there. The last time track conditions were like this I threw a car away after the race. We had a meeting and said the heck with it we would race.”

However, before they raced the trio thought something needed to be addressed.

Shocks were going to be the difference between winning and losing.

Chew said, “Ron and Mat really click. They listen to each other and there is a constant thought of improving. They talk every day.  After the 358 race we sat down and talked about the 200. Mat and Ron developed a new shock valve package.  Overnight they built the shocks and on they went.”

The fear of shocks surviving was not necessary at all as Mat sat in victory lane as the sun had set on Sunday night.

Early on Williamson just played it conservatively and pitted before the quarter mark.

Mat had started seventh on the grid and on the 50th was comfortably running fourth, he was 20th after his pit stop.  At the 100th he was sixth and then went to fifth on 113.  He was fourth on lap 126, third at 135 and second at 150, just one lap before the two leaders were forced to the pits.

The race seemed to be the leaders simply riding around and it was a matter of when to go.

Well, that was decided by Tyler Dippel.

Dippel forced a move to the low side of race long leader Peter Britten and the end result was the first and second place cars headed for the pits with damage while Williamson powered to the lead.

Mat said, “Peter had not pitted and I didn’t think he could go the distance. I felt it was the 1 and me. Peter was better than me and I don’t think I could have made it.”

Once taking the lead on the 151st lap he was never challenged.

Williamson looked back on the race and said, “I really wanted to show that the first win wasn’t a fluke. I wanted to show how well prepared my guys were. There were guys who wanted to cancel the show during the driver’s meeting, but the fans had bought their tickets and we went forward to put the show on.  Once the dust cleared off it was better.”

As the race wore on Mat said, “I put the pressure on myself and I think I redeemed myself running through the holes.”

When asked what he would remember about the week, Mat was quick to say, “The three second place finishes. I just felt I could have done better.”

Like all drivers he wants to win and the combination with Buzz Chew and his crew chief have meant a lot.

Talking about his relationship with a team that has only been together a few years, Mat said, “Sometimes Buzz tells me I drive a bit too conservatively.”

Buzz explained, “Yes, I’ve said that, but remember Mat owns his own equipment and knows how to take car of it. He knows what is involved. He doesn’t want to hurt the car come on the hook. He does drive conservatively, but I know why. However, there are times when he will run conservatively for 25 or 50 laps and when it is time to make money he goes like hell.”

This year has been tougher than expected for the team.

Chew said, “We have really struggled this year. We started out with two wins and went dry until the past week. We’ve had thirds and fourths. We won the championship here in ‘19 and it kind of caught a couple off guard as we beat Friesen and Sheppard. They went to work and Stewie and Matt ran better than we have all year. Ron and Mat put their heads together and we are right there. I think we found what they found.”

You would think the 200 is the biggest win this year for the team, but Chew said, “The biggest win was the Fulton Outlaw last Saturday night.  The car worked with what we were trying and driving that race is a challenge. The last time there we were second. I feel that win really flipped us around.”

Continuing he said, “You know Mat is no prima-donna. At Fulton during the 15 minute break he jumps out of the car and said we needed to change a rear shock. Spot takes it off and he said ‘let me do it’. He adjusted the shock, new what he wanted and put it on.”

The 88 team is relatively new to dirt racing.

Buzz Chew has been in racing for decades, but the majority of that time has been on asphalt.

Busch North, Busch East and NASCAR Modifieds were places where the race organization spent the majority of its time.

However, a few years ago there were some issues that led to Chew saying, “We’re going to run dirt.”

Making that shift from asphalt to dirt, according to Chew, was a big learning curve. Everything on dirt is the complete opposite from asphalt. Everything you have applied in the past doesn’t hold true in dirt. We basically started over.”

Right out of box Mike Mahaney came about and they got the program going.

Buzz said, “The Mahaney family are tremendous people” and there was mixed success the first year.

However, it wasn’t long term as Williamson came in board.

Mat said, “I had success with my own equipment and Holmes gave me great motors, but I knew I could be competitive in Buzz’s car. It.

The cohesiveness of Chew, St. Marie and Williamson is quite obvious.

Buzz explained, “Mat owns his small-block and all three cars we have are absolutely the same. We share everything. We all get along and appreciate one another. Mat and Ron just click. They listen to each other and are constantly trying to improve.”

Each member of the team has high expectations.

Buzz, Chew and Spot have proven to get better as time goes on, but talking to them you get the feeling they certainly won’t rest on their laurels.