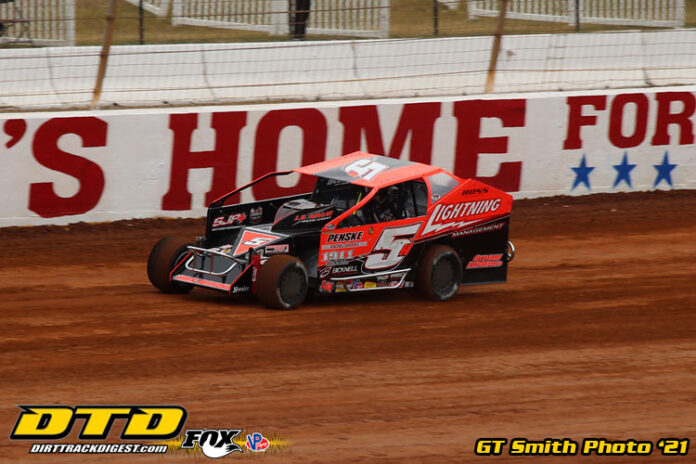 Oswego, N.Y., based Chris Hile decided it was time to take up the challenge of the Super DIRTcar Series Tour and the end result was satisfying to the veteran big-block Modified driver as he captured the 2021 Rookie of the Year once he starts Friday night’s feature at the Dirt Track at Charlotte.

As his team prepared for the final weekend of the year at the World Finals, Chris said, “I feel it was a successful attempt as I have a shot to be seventh in points. I think I am only seven or eight out and I would really like to do that. I am surprised I was eligible for Rookie of the Year, but we can wrap that up. We had a second at Orange County and at Brewerton rwe an well, but the redraw was terrible. We were running top three at Ransomville, but blew a tire with one lap to go. We had some hiccups along the way or I feel I could have been in the top five.”

Continuing, he explained, “One of the great memories was Bristol. It was fun. It was neat. The first night we ran from 19th to eighth and I did it while running the top side. I was comfortable. So the next day I just entered the first turn some three feet off the wall and ended up with a track record. I still have the small jar of dirt. Bristol was tough as I have never have experienced the G-forces like it provided. It just buried you in your seat. However, the roof angle on these cars and the banks made it tough to see far out. You were buried down in the seat and with the angle you really couldn’t see that far ahead.”

Doing the tour was a tough decision as Hile owns his own heating and air conditioning business.


He said, “It was a matter of logistics. That was the toughest part of deciding to do it. We had to figure out the schedules of everyone involved.“

He wasn’t concerned too much about running tracks that weren’t his regular spots.

He stated, “I tuned in pretty quick to tracks and I think part of that was because of where we run weekly at Brewerton. I had run Canandaigua, Weedsport as well as Fulton and had visited several other tracks. I really feel that I had run against some of the best as drivers in Central New York are as good as those from anywhere else.”

Of Charlotte he has been here nearly a half dozen times and noted, “This is unlike any other track we run. The G-force is second only to Bristol, and though it appears to be a small track, it is big. It has big track momentum and we have nothing to compare it go. It is so big and wide and you could probably do a six or seven wide out there on the parade lap. It doesn’t look really banked, but it is especially the straights.”

Will the tour be a stop for him next year?