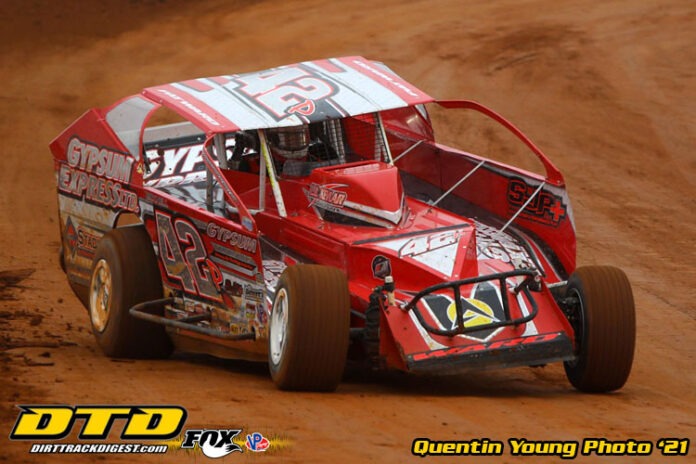 The racing world was shocked when it was announced that John Wight was shutting down two of his teams at the conclusion of the ‘21 season.

So, for fan favorite Pat Ward, this is the final time he will slide into the cockpit of the No. 42p as the best-of-the-best in Modified racing are set for the World Finals at The Dirt Track at Charlotte.

Standing alongside his mount on Friday afternoon the soft spoken Ward talked about the past and present as he said, “I’ve been with this team for 21 years and we’ve had our ups and downs. This is just another day, but I am sort of worn out as it’s been a tough last couple of years.”

Anyone in the know understands that Pat does it all. He maintains the cars on the weekly basis, loads them into the hauler, slides behind the wheel of the rig and begins the trek to any of a variety of races throughout the Northeast.  Then he races, loads it up and, usually along with his sidekick Jennifer, starts the ride back to the shop to arrive in the middle of the night to unload the car.


Certainly there have been some loyal pit crew members for Pat at the track, but basically it is a one man show.

Reflecting, Pat said, “This is getting too much to do my myself and at times I really don’t know how I did it. It’s been fun and we won a lot of shows while running up front.”

As for the ending of the ride in the 42p the Hall of Fame driver said, “It’s tough to know it’s ending, but overall this is just another day.”

On the upcoming weekend, Ward noted, “I always have run well here. I will try to do my best like I always try to do, but there are a lot of good cars here. I just want to do some racing and do the best I can do.”

“I really haven’t had time to think about it, but I still want to race,” he concluded.