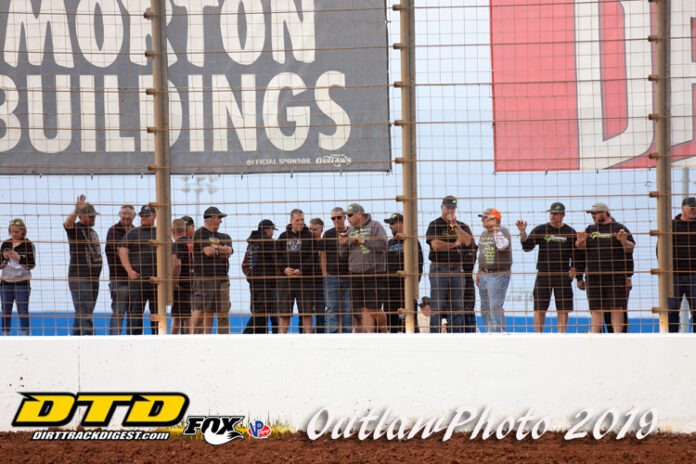 Fans poured into the Dirt Track at Charlotte on Wednesday and Thursday.  Unfortunately, so did the rain.

Many woke up just a couple of hours after Midnight to get ready for that dark drive to the airport to get to the World Finals. Others were on the highways headed from the north for the annual pilgrimage to the track in the shadow of a major NASCAR Speedway. Still others were hunkered down in their campers in the adjacent parking lot.

As the morning progressed, drivers, team members, media and sponsors stood in a drizzle getting their credentials and all of the area restaurants were filled with race fans trying to kill time eating and drinking in hopes that they would eventually see a show in what would have been a damp, frigid night.

It would also be a nightmare for photographers as the infield would potentially be a quagmire.

Officials adjusted the schedule for Thursday and that generated the ire of many Modified fans as the Beasts of the Northeast were scheduled to run their heats back-to-back at the conclusion of the World of Outlaw Sprint and Late Model time trials. That schedule didn’t allow any driver having misfortune to get their car repaired in time and the haul from the North would be for naught. They’d have little chance other than start in the rear of the last chance races if bad luck hit.

However, that never reached reality as day one went down to the weather setting up full three division shows for the next two nights.

Due to forecasted cold weather the World Finals start time was shifted to 3 p.m. on Wednesday.   After the rainout on Thursday, it was announced that on Friday a 5 p.m. opening ceremonies time was slated with hot laps getting rolling at 3 p.m.

It will be non-stop racing on Friday and capped off with the big-blocks, Sprints and Late Models in that order.

A prospective entry list was posted by DIRTcar officials earlier in the week for Super DIRTcar Series Big Blocks.

However, the thing about the World Finals is to always see “who else” is in the pits.

This year there is a significant number of regulars as well as new faces.

It is no surprise Justin Haers, Rich Scagliotta, Tim Fuller, Danny Johnson and Mike Mahaney are on board.

Brett Hearn and Tim McCreadie are tremendous additions to the field.

For Northeast fans this weekend appears to be the final one for the legendary Gypsum Racing team consisting of Billy Decker, Pat Ward and Larry Wight.

Owner John Wight has reduced his racing stable in shutting down the Decker and Ward teams and significantly reducing the schedule for his son Larry as it appears that the Big Red Team will no longer be traveling as regulars on the Super DIRTcar series when 2022 begins.

For many Mod teams this is the finale.

The beauty of the World Finals is that fans get to see three of the top divisions in one place at one time.

When Saturday night ends it will mark the final appearance of the legendary Jac Haudenschild as he will complete 48 years behind the wheel and hopefully he will be sent out in memorable style.

The Late Models usually bring out the largest number of cars, but a prospective 43 teams are anticipated.

This won’t end of the season for the Late Models as these guys are running nearly year round now. Many will be headed to Vegas for an upcoming chance to win up to $100,000.

Well, the sunset filled the sky with a pinkish hue and Upstate New Yorkers know that means a nice day tomorrow.

Expectations are for cold conditions with plenty of racing to keep the fans warm on Friday and Saturday at the NGK NTK World of Outlaws World Finals.