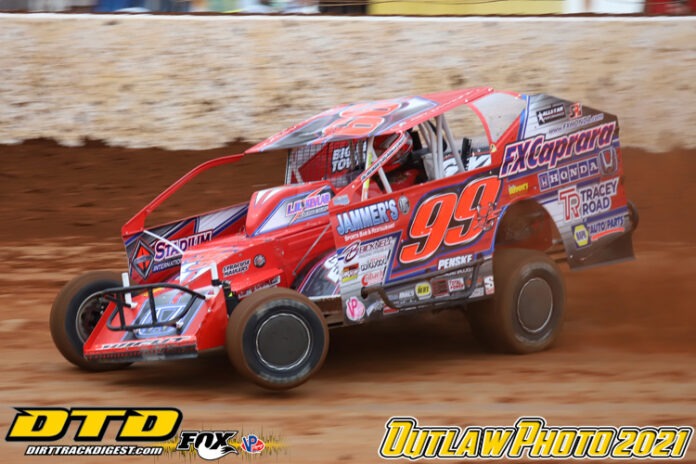 Larry Wight started fifth in his qualifying race, but when the night was over he settled for the runner-up spot behind 17-year-old Alex Yankowski.

The story of the night for the driver of the 99L was the very first lap of his heat. Starting inside the third row he knew he had to make a move which would eventually lead him to a second place finish, a spot in the draw and the outside front row starting spot.

He said, “You just had to be fast and make up positions at the start because once the green was out the track was simply too fast. I ran the bottom on that first lap as that was the place to be. Cars down there were throwing stuff across the middle and top making it difficult to pass out there. However, I think that the last chance races might provide for a wider track.”

And Larry was right as when the feature came around there were multiple lanes.


He took the lead from pole-sitter Brett Hearn and ran away in the first half of the race. However, with a dozen laps to go on a restart the pursuit commenced and with Yankowski going to second with 12 to go and taking the lead with eight left.

Reflecting on the race, Wight said, “It was good off the green and I don’t know, maybe we cut a tire too much. The car was really good there. Maybe the caution didn’t help.”

He thought there might have been a reason for the tire situation as he explained, “I got to traffic quickly and maybe maneuvering through traffic might have used up the right rear more than I thought. Early on I could move around and I wasn’t really pushing the car at all. I didn’t really need that late race caution.”

Though probably disappointed with the runner-up finish, Larry showed nothing but respected for the drive by Yankowski.

He didn’t think it was as much of a surprise that the teenager picked up the win.

Larry said, “He’s good at this type of track. He’s got a lot of talent. His help is outstanding as he has Kevin Bates helping. Bates is friends with Stew (Friesen) and in coming here his learning curve might have been a lot easier than it is for others.”

Wight hasn’t had the season he is use to and noted, “I guess we just need luck to go our way.”

However, the second place finish was the best he’s had at the Dirt Track at Charlotte, but he knew he was that close to getting that first victory.