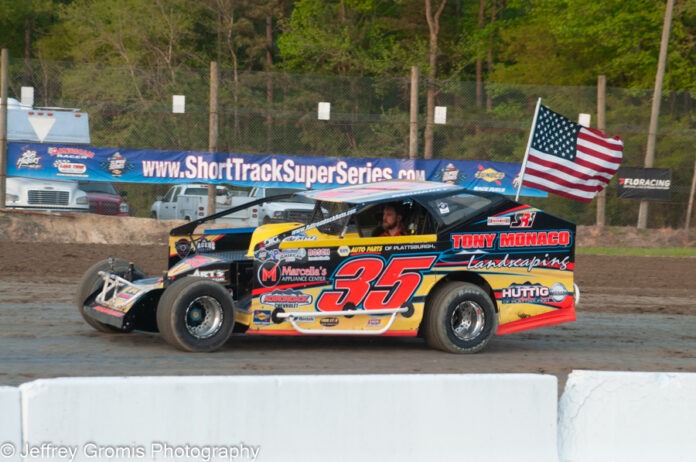 Mike Mahaney cut his teeth on some New York State bull rings, but he has evolved into a championship type of driver.

Race fans are used to watching Sprints and Late Model teams transverse the country, but the Modifieds have always been basically what Shane Andrews calls “The Beasts of the Northeast.”

Well, something good has come from the COVID-19 year as Brett Deyo took the Modifieds on the road to present races at tracks Northeast fans have never heard of. There was Cherokee, Ark-La-Tex, and Chatham.

Suddenly, there were a group of Northeast Modifieds growing in the Louisiana-Arkansas-Texas area and this year there are nearly 24 teams running a Cajun Series.

For Mahaney, it has been an adventure because his trek isn’t starting this weekend, but actually started over a week ago when the team left the Northern New York base in Elizabethtown.

The first stop was Georgetown where Mahaney was chasing the STSS South Region crown.

Mike said, “It was the first time I’ve run the southern series and I knew it would be a challenge. One thing about it is that the Southern Series you have to drive more aggressively because of the tracks. The Northern one is a little slicker. I had to race hard and there are different guys on the track who I don’t normally race against. It was definitely a learning experience.”

Continuing, he noted that the heat was difficult as the track wasn’t what he thought it might be.

In the main he said, “I knew 12th place was the key and I ran the race tentatively. Winning that championship meant everything.”

Mahaney races for a living and therefore needs to go where he feels he can benefit the most.

He traveled with the Super DIRTcar Series throughout most of the season, but when Fonda offered a $50,000 to win event he had to make a decision.

Mike chose to go to Fonda and was booted off the platinum driver SDS list.

He said, “All season long people asked what I was going to do, but results determined what I could do and I couldn’t make that decision until the last minute.  It was a tough decision as I was having a decent years on the Series. However, after a battery failure at Weedsport the decision was easier. I had to determine the balance of what Fonda was paying or the money I would make in the series and decided to go the Fonda route.”

So the path was set for the rest of the year and he now is currently on a pilgrimage from Georgetown, to Cherokee, to the Dirt Track at Charlotte and then on to Louisiana.

Now the team packed up and headed south, but before arriving in Charlotte there was a race that popped up on the schedule for Gaffney’s Cherokee Speedway.

Mahaney said, “It was a nice, smooth, fast track with a lot of bite. Sadly only five cars showed up, but I got paid $2,500 for second and even Kevin Root who had problems and finished fifth took home $900. However, we bent a valve and replaced the motor when we arrived in Charlotte on Wednesday morning.”

The hauler isn’t the usual hauler for the team as Mike said, “We have an extra motor, our small block for Louisiana and the trailer is simply filled up, and when packed, you really can’t even walk through it. We have lots of tires and wheels as we have to have American Racers and Hoosiers and all sorts of equipment. We have two types of fuel we brought. I feel so good that the team has the finances and I have the freedom to race when I want and how I want to do it. This is something I’ve always wanted to do.”

So opening night at Charlotte wasn’t kind as a bolt broke in the steering sending him into Kevin Root in the main event. There were plenty of bent parts and the team went to work immediately for Saturday afternoon action.

However, when they leave Charlotte it is time to head south for Boothill Speedway in Greenwood, Louisiana; Ark-La-Tex Speedway in Vivian, Louisiana; The Rev in Monroe and the former Chatham Speedway now known as Super Bee.

Mahaney is actually living a dream and he hopes to continue.

If there is a race he might show up as he is now running what appears to be an Outlaw schedule.