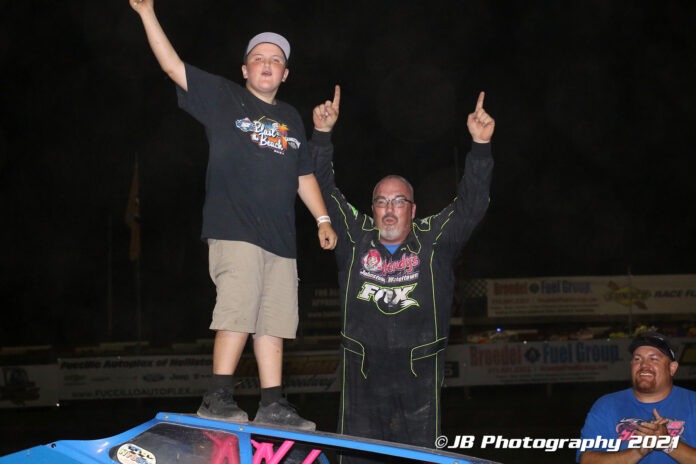 There use to be a popular saying, “The thrill of victory and the agony of defeat.”

Well, on the final night of this year’s World Finals Rocky Warner had almost the thrill of victory before defeat.

Warner was alongside Brett Hearn in the big-block Modified main and kept him in sight in the early going.

Rocky said, “I really feel I had a better car than Brett and I was trying to be smart.”


As lap 13 went into the books Rocky appeared ready to make a lead passing move, but then the “agony” hit.

The 98 slowed and then came to a stop while running solidly in second place.

A disappointed driver told Dirt Track Digest, “We not only broke the axle, but ruined our entire rear end.”

Warner, who after the race was scheduled to load up and head to the Short Track Super Series Cajun Tour, wasn’t sure that his racing season would continue.

They did not have an extra rear end they needed and late Saturday night he said, “Jason (Simmons the car owner) is searching around the pits right now trying to find us one. I don’t know what will happen. On top of that, his dad is on his way down here with a fresh open small-block for Louisiana. I don’t know what is going to happen.”

Well, Rocky finally did have some luck as Jason Simmons said on Sunday morning, “It really wasn’t that hard. I asked Scott Jeffrey’s as he was leaving and he had me grab Pat Ward’s spare.”

Meanwhile the motor has plenty of highway miles on it already in the back of a truck.

Jason explained, “It was built by APE Engines which is Brandon Hightower’s dad’s engine company out of Louisiana”.

Continuing he said, “Charlie Caprara bought a car from Hightower, took the motor out and put crate in it for his son Matt to use in the car. They don’t plan on running ant STSS races, which the motor is built for, and it’s not legal for DIRT shows, so I bought the engine that was built new and sold with the car”.

Now the work continues as Simmons explained, “David Tanner and Rocky are headed south to Brandon Hightower’s race shop to change the rear end and put in the open motor on Monday morning.”

The motor went in Monday night, and despite traveling thousands of miles over the interstate highway system,  it is ready to roll up its most important miles this week in Cajun Country.

Hopefully, the five race Cajun Series will see Rocky pick up a few more thrills and a little less agony.