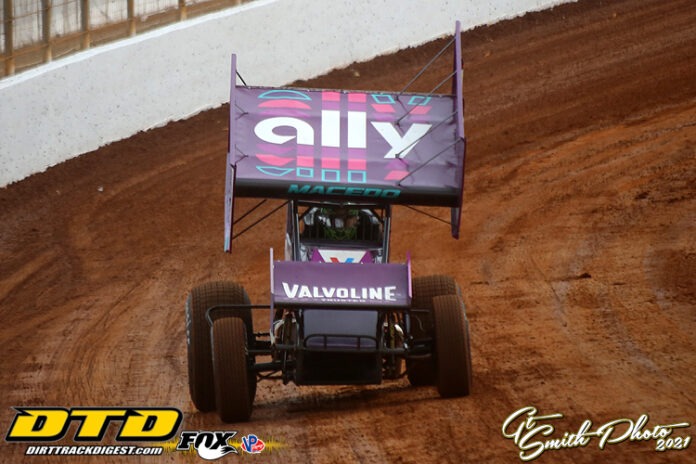 The Macedo name is pretty familiar in Sprint car racing as the mention of the name quickly
sends the brain to “Carson.”

However, there is another Macedo who received a tremendous opportunity this weekend at
the latest edition of the World Finals at The Dirt Track at Charlotte.

Cole Macedo is behind the wheel of the Alex Bowman owned 55 and made an impression right out of the box.

He was second quick in his group behind first night winner David Gravel and started near
the front of his heat, but settled for a qualifying spot in fifth.


Cole said, “I qualified good, but threw it away. The top two get you in the dash and that
makes for an easier night. I put myself behind.”

However, he opened the eyes of many race fans and pit-side observers with his heat run.

In the early going he noted, “I was a little tight in the backstetch and was sweeping too
hard. I got crossed up and the right rear started to come around. I was able to save it.”

The “save” was tremendous as it appeared he was about the bring out the yellow as the rear end appeared to be too far around to save, but Cole managed to maintain momentum and earned a qualifying spot.

Of the track here at Charlotte, Cole said, “I’ve run out in Ohio and this is the toughest
track I have run. There is a lot of dirty air and if you are behind the guys in front of you can really take air off the wings. It is funky. You have to manhandle the car and continually watch not only what you are doing, but what everyone else is.”

This ride is one that many drivers might seek and Cole said, “This is pretty good. I have
a good relation with Joe (Gaerte) and he had a pretty good relationship with Alex. It’s cool and special to have a good opportunity for a kid like me. People will look at it. I felt I did a pretty good job last night.”

Macedo has been around racing his entire lift.

He said, “I grew up with the Tarlton Family as Tom is my uncle. He pushed me out of the
womb so to speak and I went to Ohio to try to make a living doing this. The Linders took me in and Ray Brooks is my car owner.”

They’ve had a decent season as he noted, “We’ve had seven wins running at Attica and Fremont.  We went to Lernerville, Kokomo, but stayed mostly in Ohio. We would branch out once in a while and go to Indiana. It is my second year in the Midwest.”

Though he is trying to make his own way and his own name, there is the shadow of older
brother Carson.

Cole says, “Yeah, there is a little shadow, but that also helps. He did this and can tell
me what to do and what not to do.”

He hopes that this ride with Alex Bowman isn’t a one time deal.

However, looking ahead he will continue ‘22 in the Brooks 18 and noted, “We won’t be running for points at Attica or Fremont and will go out and run when the Outlaws or All Stars are near.”

The 21-year-old replanted Californian is ready to prove himself and hoping that in years
down the road when the name Macedo pops up people’s brains go not only to Carson, but also Cole.