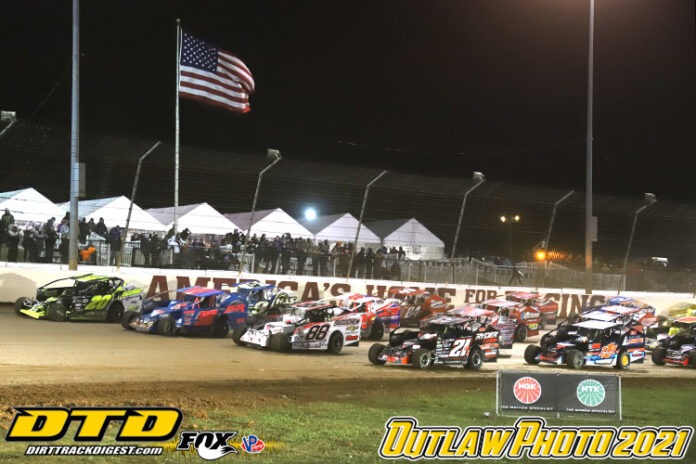 Writing story after story, running (or in my case wishing I was running) and simply going, going, going allows no time whatsoever to reflect on what I have just witnessed.

At Charlotte this year there were at least three things that hit me at the moment they happened as well as on the flight back to Central New York.

First was ‘The Jet.’


Brett Hearn is among the modern legends of Modified racing.

As he climbed from his winning car on Saturday night, he put his head between his arms and rested his forehead on the roof of the car for some length of time you knew this meant everything to the Sussex, N.Y., driver.

If someone had told you the 63-year-old Hearn and the 17 year old Alex Yankowski would be the weekend Modified winners you would have looked at them and wondered how much they had had to drink.

Usually when watching a race fans simply see a driver win, do the victory lane interview and the program continues.

However, every once in a while in the back of your mind you wonder, “Have I just witnessed the final win in a legend’s career.”

Years ago the Oswego Speedway held a Sunday afternoon show and the legendary, colorful Bentley Warren passed Chris Perley in the late going to win what would prove to be his final feature in a Supermodified. I mentioned to my wife that we might have witnessed history.

Such is the case with Hearn. Though he will continue to race (and maybe get some more wins), what if this victory in front of over 20,000 fans was his last. It would be a fitting way to get that last one.

Jac Haudenschild has been around for decades and was a traveler with the World of Outlaws.

His final race in a Sprint Car was Saturday night of World Finals.

Fittingly, officials placed him in the spotlight at the front of the field as he paced the World of Outlaws main-event.

I don’t get emotional often, but as the field exited turn two on this frigid night I, along with the fans around me, were standing cheering and saluting a genuine legend.

I had tears in my eyes as my mind flashed back to Weedsport Speedway over 30 years ago and my young son walked up to Jac for an autograph. The smile on my son’s face was imprinted in my mind. There were no phone cameras to get a picture of that moment, but to this day it stays in my mind. (Later he had the same smile when Brad Doty also signed his card).

Everyone who has followed ‘The Wild Child’ knows its checkers or wreckers and ironically on the final night of his career he got collected and ended up on his top.

Jac thanks for the memories.

Racing is packed with nice guys, but one of the nicest is Pat Ward.

I looked from afar on Saturday night as the the No. 42p was lifted for the final time into the back of the big red Gypsum hauler.

Pat is one of the old timers. For decades he has worked on his cars, driven them, competed, loaded it up and got behind the wheel of the hauler to bring it back to the shop. He did so much by himself.

As an announcer I get the opportunity to be up close with the drivers in victory lane.

One thing about Pat is that no matter when he wins he hops out of the car, possesses a huge smile and hammers the top of the car. The thrill of feature wins never goes away for him.

He doesn’t seem shy about sharing information and has had a huge impact on Larry Wight as he has been influencing him ever since Larry was a teenager.

Sadly, Pat Ward is in search of a ride and as he currently putting the ‘21 season behind him and looking forward to what the future might bring I find myself reflecting.

Super DIRT Week Pat was a bit cool toward me and after asking around I discovered that it was my Dirt Track Digest story about the closing of the Gypsum 42p and 91 teams where Pat found out that he didn’t have a ride when the year ended.

I felt terrible and we talked at Charlotte. There is no way anyone would want to hurt Pat Ward and even now it hits me.

In my mind I think Pat could help drivers just getting started. He reminds me of a patient father or grandfather who leads by example and leaves a tremendous mark on everything he touches.

Hopefully, Pat will be back on the track in ‘22 and I know one team already that has reached out to him. And hopefully there will be others.

The next edition of the World Finals is going to be four days.

I have no idea what it will look like and I’m not sure DIRTcar does at this point, but I would suggest one thing.

Do away with the one night of time trials and Mod heats.

Modified fans who can’t make it for the first night simply see a couple of last chance races and features.

With the rain out on Thursday this year it set up a full show for all three divisions.

Keep the nightly full show and then maybe on one night do something different, out of the box or creative. Treat all the divisions equally. Their fans and the race teams deserve it.

Like I noted, I get very little time to reflect on what I see and at an event like the World Finals where cars come out for race after race there is no time to let it sink in until hours or sometimes days later.