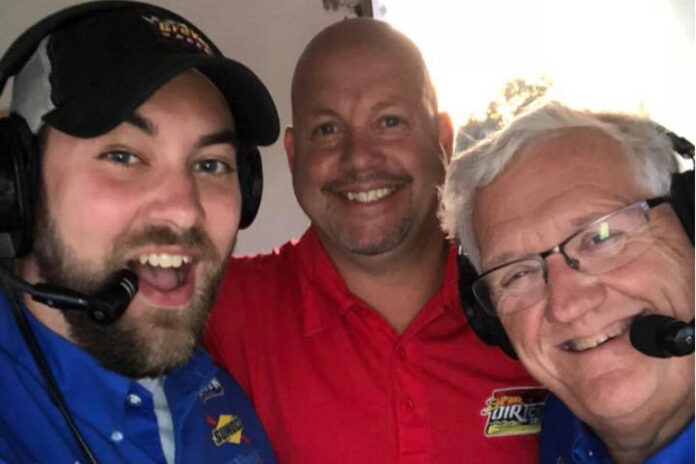 For nearly 50 years every weekend in my life has been booked at a race track either writing or announcing.

I’ve missed too many of my children’s life events. I spent Sundays in my office writing for hours to have copy at the Speedway Press or a racing publication first thing Monday morning.

I have had the most understanding wife a man could ask for and she deserves better.

My racing family have been my friends in the announcing booth each and every weekend.

And that relationship with those folks makes this very difficult.

But my announcing every weekend is over. Doing Brewerton (my all time favorite track) and Fulton for the past several years has been extremely satisfying, but when the decision was made to go with one announcer at each track that changed the nighty dynamics considerably.

I spent last season recovering from  a knee replacement and struggled at times.i couldn’t get to Fulton’s pits regularly and that impacted what I could  provide to fans, they were more deserving than what I was giving  them.

Finally I felt well enough to do the pits on outlaw weekend. John and Larry Wight along with Corey Reed found me assistance with super fan Chris Coogan bringing a wealth of knowledge to share with the fans.

By the time I was ready to really get going the season was just about over.

For nearly 50 years I have announced or written. Glenn Donnelly hired me at the very beginning to work with God, otherwise known as Jack Burgess.

With Joe Marotta and the late great Mr. Announcerman himself Arnie Pugh. And over the years I have had the privilege to work with many fellow announcers.

George Caruso hired me to be the main writer for the Speedway Eagle at Oswego and when Rich Goldstein moved South I found the opportunity to be the trackside announcer.

Roy Sova “encouraged” me to leave Oswego and it turned out to be one of the best things that could have happened.

I could focus on Brewerton and eventually did the weekend doubleheader with Fulton. I never keep track of time but I do know that many local drivers listened to me when they were just kids. Last year I suddenly realized that I was announcing third generations. So I guess I’ve been around for a long time.

I couldn’t have had the run I’ve had without faith from people who own the tracks. Thanks to George Caruso, the late Bub and Victoria Benway, Bill and Kim Shea, Chip Burdick,The Trumps, Jim Ferlito, and most importantly Harvey and Joan Fink.

If someone ever needs a fill in I might get to dabble behind the microphone again, but in the future the keyboard will see the bulk of my racing time as I plan on expanding my writing with Dirt Track Digest thanks to Mike Mallett, George Smith and GT Smith. These guys have allowed me in the past eight years since my retirement to have another racing family in my attempt to remain active.

I am going to miss seeing Megan, Tim, Ted, and Dave each Saturday night and I will miss the regular contact with the fans who I loved so much talking with.

It’s difficult, but I know that when it’s over, it’s over.

Thanks to owners, fellow announcers, fans, drivers, crew chiefs and anyone else I might have forgotten. Nearly 50 years announcing was a  good run, but it’s time to have a weekend where I am not committed to being at a certain place at a certain time.

To all thank you for the memories