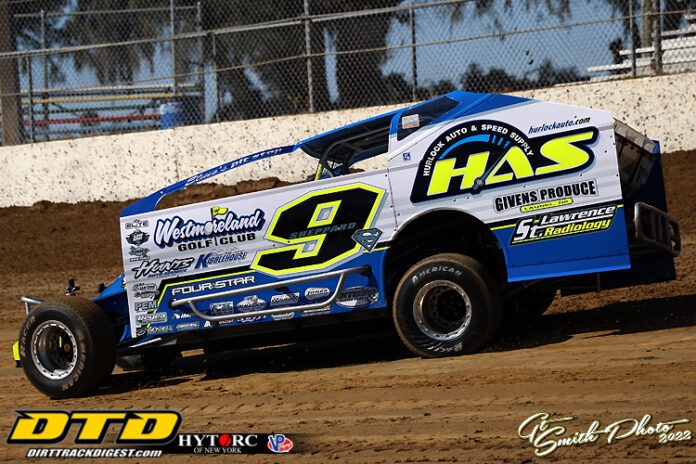 Florida hasn’t been overly kind to Matt Sheppard over the years, but on Wednesday night in the kick-off for the Short Track Super Series Sunshine Swing he held off multiple side-by- side challenges, lap after lap lead swaps to eventually coast to his first win of the 2022 season.

Sheppard said, “This is the 51st different track I’ve won at and it was good to get this one out of the way and get that first win.”

Luck didn’t have much to do with the night as he drew eighth for his heat and rallied for second.

It was on to the draw where he picked fifth and at the start was quickly to third.  By lap two he was second.

This set the stage for a battle royale with Mike Maresca as they continually swapped the top spot. With 13 laps to go Matt was in front, but suddenly with traffic causing nightmares for the leaders Billy Pauch Jr. was right there.

However, with five laps to go the yellow came out and it was wide open race track for the leader the rest of the way.

However, he said, “I was happy to see that caution (with five to go). Traffic had been tough, especially when it was two wide. I was struggling with the balance of the car and I needed a clear track to get the car to feel its best.”

He said, “I hope a lot of people on Flo saw that we had a good car here. I didn’t need that late yellow. The car got better. My front tire softened enough to turn the car. It was a wild race and traffic was tough. However, it was a good start to the week and the car was working well tonight.”

Marc Johnson had never even seen All-Tech, but that didn’t seem to matter as the Lebanon Valley Speedway regular finished a solid third and was contending with the front runners in the late going.

Johnson told DTD, “It was fun, but I was a bit concerned coming down. Randy of Bicknell told me that it is a tough place for a legal DIRT(car) big-block, but it seemed to work out.”

Continuing, he said, “At the beginning of the race I started out on the bottom, but it got greasy so I moved up. The car was nice up there as it was hopping and digging. I was catching Pauch and at one point I could see Sheppard and Maresca coming back to both of us. I didn’t want that late yellow.”

He concluded by saying, “I am happy as it was our first race and we had a nice run.”

Erick Rudolph started eighth in his heat only to rally for third.

He started ninth in the main and finished a respectable fourth.

The Ransomville, N.Y., driver was a man of few words, but got his point across as he said, “It was all right. It was the first night for us and we passed a few cars out there. It is something to start the week off with.”

Fifth place Larry Wight appeared to have his night go out the window with a spin on the second lap, but his run from the rear eventually resulted in a fifth place finish.

Larry commented, “I clipped a tire trying to pass ‘The Doctor’ and spun out. The car had been good all day. In the heat race I had a flat rear, but held on for fifth. It was one of those heats with several good cars and the draw didn’t go our way. However, the car was really good tonight and late in the race I had a left front flat and it took me about three laps to get the heat in the other tires to try to make a run, but overall I’m okay with it.”