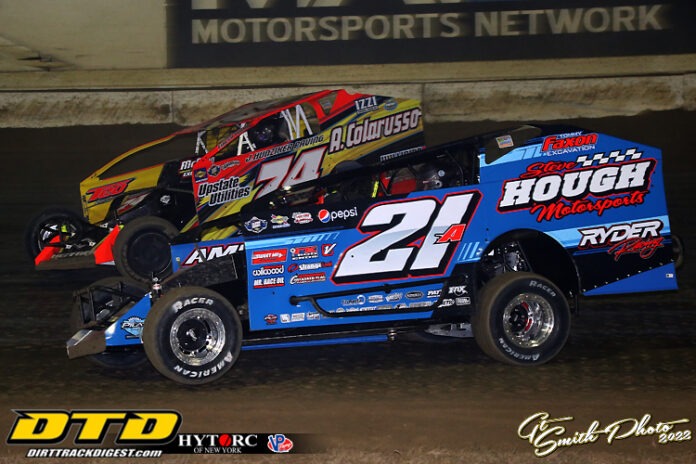 Now that was one hell of a 30-lap feature at All-Tech Raceway on night one of this year’s Sunshine Swing.

Matt Sheppard, Mike Maresca and Billy Pauch Jr., just kept throwing haymakers at one another as they swapped positions too many times to count in one of the most exciting features you will ever want to see on a half mile.

If it hadn’t been for a yellow with five laps to go who knows how this thing would have come out. Matt said he needed a clear open track while Pauch and a late rallying Marc Johnson simply wanted nothing but traffic. It was what I used to call when I was announcing “An Instant Classic” (which can probably be rewatched on Flo).

You never know what to expect in February in Florida and promoter Brett Deyo thanked the drivers at the drivers meeting for coming down. The numbers exceeded his expectations as with COVID-19 and a difficult time finding parts and tires there were 42 Modifieds and 44 Sportsman from a wide area.

Mods in action included many well known names and some that only a local track follower might know.

Driver’s Meeting Short and to Point

Opening night saw no provisional positions available as there will be the rest of the week.

However, Deyo noted that the field would be increased to 28 cars.

He anticipated a good show and indicated, “They expect 30,000 plus to be watching on Flo tonight. Mimi will be interviewing all the winners on the frontstretch. We want to be sure to give you sponsors national exposure.”

He noted a set tire was to be run all around the car with the exception of the left front. With nylon difficult for tire companies to come by American Racer had 53’s for the right rear and 44’s for left rear and right front.

No one had to bring “a trailer of tires” to come down as American Racer had prepped over the winter months for this.

Only a couple of yellows all night long in the Mods with J.R. Hurlburt bringing out one in a consi and in the main Larry Wight spun and Stewart Friesen crashed for just two slowdowns in a main that took the track at 8:55 p.m. and was over by 9:14 p.m.

Top five drivers weren’t disappointed at all with their finish as they all seemed to feel their cars ran well and they were off to a good start of a new season.

Matt Sheppard, who has won hundreds of features, talked about winning at 50 different race tracks before the night’s action started. He felt that was a real accomplishment. The 50th he thought was Genesee Speedway. Well, by the end of the night, he added 51 with All Tech.

Even after Maresca’s left and right rear suspension was shot he still managed to challenge for the lead.

Track crews did what they could by all 86 cars were on the track prepping it. It resulted in a pretty decent, fast and relatively smooth half mile.

In hot laps Lousiana’s Tommy Rascoe was quick in his group as were J.R. Heffner, and Matt Stangle, but the only 18’s were turned in by Friesen and Jordan Watson.

L.J. Lombardo stopped in turn one in hot laps as his gas peddle broke.

Central New York’s Jeff Taylor made his first trip south, had a good draw and won his heat. He finished up eighth in the feature.

Jordan Watson started 26th on the field and came home in sixth.

Peter Britten also came from the consi and ended the night in ninth.

You couldn’t take eyes off Tyler Siri in his heat. He started 11th and muscled his way into the top five and eventually settled for second. He made an impression.

Rick Laubach dropped out of the main as he said, “Car was simply too tight. I couldn’t do anything.”

Demitrios Drellos also ended his night early as he was totally unhappy with the way his car handled.

Fans noticed there was a spot entering three and going nearly to four on the low side of the race track that drivers seemed to be able to make up double digit car length deficits. Will see if it is that way tonight.

Lots of racing for the Mods this year. Matt Sheppard noted, “Right now it looks like about 115 races on my schedule. We run from this weekend to November 15 with only one weekend, March 6, that was aren’t scheduled for a race.

Good start to the Sunshine Swing and next three nights could be interesting. Tonight is 35 laps for the Modifieds instead of 30 for the Mods.