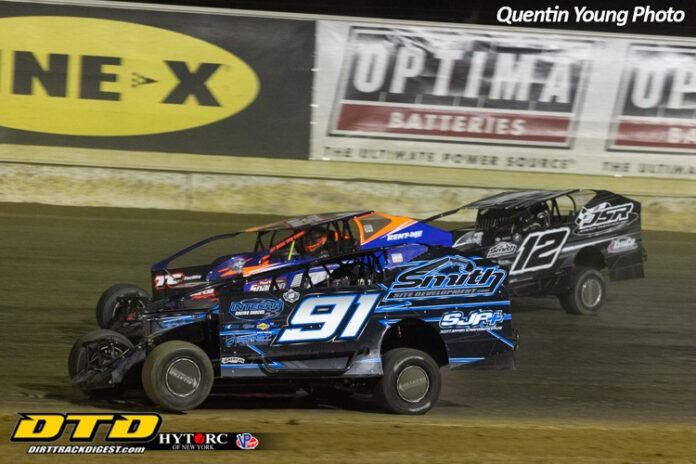 Billy Decker will continue to thrill his fans during the 2022 season as he takes yet another step in his legendary career.

With the Gypsum Racing Team reducing its stable to just one car it provided a different opportunity for the “Franklin Flyer.”

Billy told Dirt Track Digest, “I was not ready to retire. Maybe I wanted to slow down. Retirement probably isn’t that far away. I had run for Jeremy (Smith) last year in a couple of shows and the opportunity to continue with him presented itself.”

Looking at the upcoming season, Billy explained, “I’m wide open. I will definitely run the Elite Series and Friday night at Utica-Rome.”

Continuing he said, “After those we will see. We plan on going to Ohio with the Super DIRTcar Series and see where it goes from there.”

Asked about the difference between running for the Gypsum Team and Jeremy Smith Racing, he said smile, ”We eat better!”

It was pretty obvious the char grilled wings and multi-topping pizzas that were available on the back of the four wheeler were pretty tempting.

Billy and Jeremy is a combination that could be expected.

Decker said, “We have been friends for a long time. He was racing a few years ago and got out of driving. He was doing a site development project in our area and we had a piece of property he needed to put some soil on it. We talked and I ended up running the 358 for him that year and won at Brewerton.”

From time to time in the past couple of years Decker has run the Short Track Super Series with Jeremy’s equipment and occasionally at other Southern Tier regional tracks. That will be tremendously expanded this season.

Billy has long worked with Scott Jeffrey and the duo continues.

“Scott and I have been together since 1994.  I have a full-time job and Scott eats, sleeps and breathes racing. Racing is his life and he is right up there with his mechanical skills and is up to speed on everything relating to that while I am not.”

Decker is looking forward to this year and continues to seek the checkered flags.

Billy said, “We failed to win regularly last year. We had four wins. We need to have fun and win more races this year.”