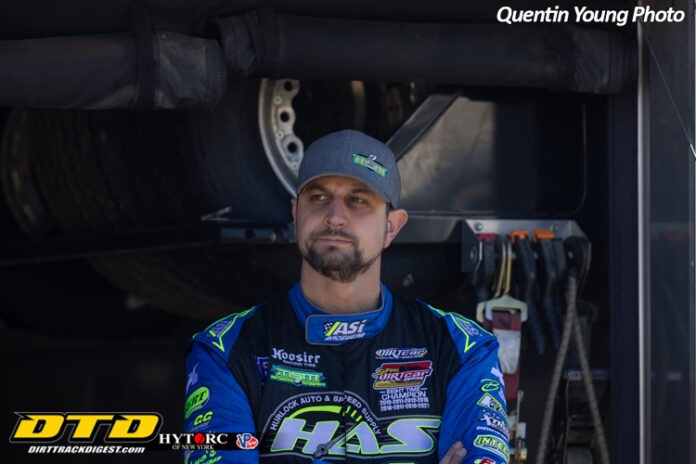 It’s February and there is Matt Sheppard relaxing in a beach chair in his trailer.

However, the relaxation won’t last long.

Matt is back in Florida, a place where he always hasn’t seen many victory lanes.

Looking at his history, Matt said, “I guess I’ve run all right down here despite not winning much, but looking at the STSS races I have been in the top five in all but one of them. The tracks are so different down here and I just struggle with the surfaces.”

Continuing he said “I’ve been decent, but racing here is not like anywhere else. It is a weird type of track. You always want grip, but you struggle with steering. It is like a teeter totter. You have to try to find a balance and that isn’t easy.”

However, just a few hours later there he was sitting in victory lane as he kicked off the very first Modified race of the 2022 season.

The complexion of Modified racing has changed dramatically this coming year and Sheppard will be diving full bore into the mix.

Talking about the upcoming season, Matt said, “I will be doing all the Elite shows, Utica-Rome on Friday night. Saturday is still up in the air, but definitely Middletown will fall in there. I just don’t know if I want to do it weekly, but there will be some involvement at Middletown. There is a lot of money there and I liked the playoff system they used last year. I have to run at least 12 DIRTcar weekly races and will also be chasing the STSS North and South titles as well as the Super DIRTcar Series.”

Sheppard is rarin’ to go and explained, “We have four cars and nine motors between the big-blocks, Deyo small-block and big small-block.”

He said, “There is good money and the purses are finally beginning to catch up with expenses for the first time in a long time.”

However, there is no secret there are supply problems with tires, engine parts, steering boxes, transmissions and rear end along with other high performance parts.

Matt indicated that could have an impact as the season progresses, especially when it comes time to freshen up equipment.

This will be the longest season ever for many racing teams.

Matt explained, “We were looking at the schedule we put together and there are 115 shows. We start this week here in Florida and end on the Cajun Tour on November 15. Between now and then we have just one weekend, March 6, that we will be off.”

So Matt Sheppard fans get ready to see your favorite driver as he will definitely be at a track near you whether you are in New York, Ohio, Delaware, Pennsylvania, New Jersey, Florida, North Carolina and Louisiana or no matter where a show might be scheduled.