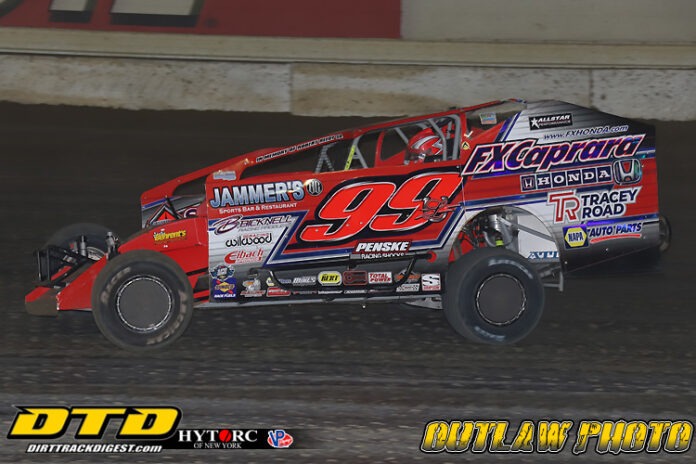 Larry Wight held off Erick Rudolph through the closing stages of the $5,000 to win 35-lap feature event at All Tech Raceway as the Sunshine Swing finished up night number two.

It was the first STSS win for Wight and he said, “We’ve been close in a lot of them. We just could never get the monkey off our back. To follow a series like this that is up and coming and really make a statement to start the season off with as one of the winners in it sets a precedent for our team. We are basically a brand new team with one car and it gives us the confidence for Chuck, Brandon, myself, my wife, my mom and dad to know that we made right choice to focus our efforts on one car and go out there and win races”

Wight started back in fourth and his thinking was “well I was watching the consis and watching the time and saw the Sportsman laps were at the end of the race so I knew it was starting to take rubber. I knew I had to get to the front quick. I couldn’t let a guy like Billy Pauch get out in front and then have it rubber up or I wouldn’t be able to get by him. He’s a good driver and knows enough to stay in the rubber. He fired and got the lead and I showed him a nose.  I knew he was going to the top and I went to the bottom. I didn’t know there was rubber down there and I felt the rubber and it was game over after that.”

The track did lock down, but Larry said, “I don’t know if I expected it to, but I was a little worried because we didn’t have to pack track today. So that sort of told me he didn’t put as much water on it. I know Wendall doesn’t want us to come out and pack, but that’s dirt racing. Cars come out to help get the track ready and then we go racing.  If he needs to sop the water to it, then sop the water to it. Rubbered up racing doesn’t make good racing for the fans, but as far as I go Harvey Fink told me the winner can’t bitch about the track, so the track was beautiful.”

Erick Rudolph improved upon opening night’s fourth place finish and said, “I feel a little better than last night and I thought we had the car to beat if it hadn’t locked down. Once it locked down it was just single file. It was frustrating, but I got on the podium and have had a couple of good races the first two nights out here.”

Third place Billy Pauch Jr., started on the front row along with Danny Creeden, and both finished in the top five.

Pauch said, “Race tracks are like race cars in that you can’t hit it perfectly every night. I should have stayed on the bottom when I had the lead, but I didn’t. There won’t be a lot of good quotes tonight. I hope third pays good. I have had a blast here all week so far and  the car really got no better or no worse as the race went on. The track just locked down hard tonight and that was it.”

Danny Johnson had his first STSS podium finish in quite some time and said, “Yeah I’m happy. The car was going good, we crossed the scales and came back in one piece. I didn’t like the 99L and 25 getting past me, so I guess there is room for improvement. Tonight’s track was totally different than last night.”

He wasn’t too upset about his finish as he said, “It was a good run until it started to take rubber. I screwed up the 96 (Pauch) early on and messed him and myself up. Last night we lost an MSD box, so I am okay with this. Track-wise, during the consi, I noticed it was starting to lock down. I saw some grey and some brown and I knew where it was going to go.”