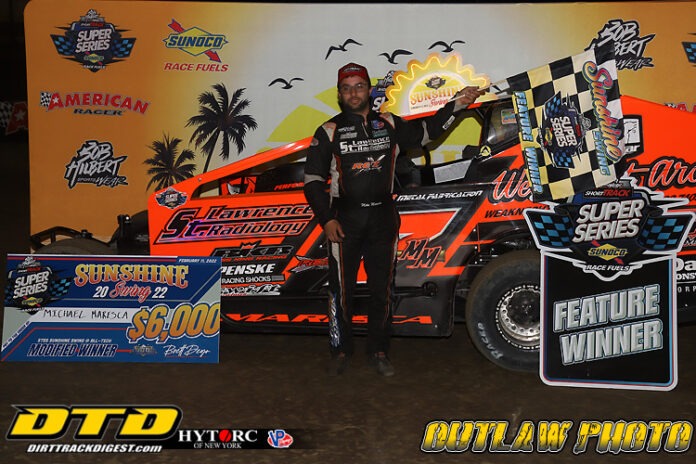 As the laps rolled along you never had an idea of exactly what the top five would look like at the end of the 40 lap, $6,000 to win Sunshine Swing Modified feature on night three.

Michael Maresca started outside the front row, but he was mired in an early race battle with Rich Laubach. Billy Pauch Jr., began to close on him. Then Larry Wight was challenging and in fact on one called back restart on lap seven he had taken the lead from the No. 7mm.

It was just one of those races, but in the final 10 laps the top three were pretty cemented in their positions as Maresca, Wight and a very consistent Erick Rudolph were on the podium with Pauch and a rapidly closing Stewart Friesen rounded out the top five.

Maresca became the 36th different winner in Short Track Super Series competition as his crew had put a new rear clip on the car earlier in the day. He had won his heat and drawn well.

However, he never was able to gather a solid rhythm in the early going as several yellows resulted in several double file restarts.

Maresca was dueling it out with Laubach.

He said, “Rich is a savvy veteran and he had moves that I will write down and use the sometime in the future. He is a smart driver and I just needed to slow things down in my head. We were able to get a good lead, but the car started to go away toward the end of the race and I was struggling the last couple of laps.”

Continuing he said, “This really can set a tone for us early in the season. I would like to thank my crew because it has been a tough week. This will make my job easier going forward. One goal I had set for myself was to win an STSS race and that has been accomplished, but I would like to win one of the bigger STSS races.”

Larry Wight settled for second after appearing to get a late run with just a few laps to go.

The second night winner said, ”The car was good and tight at the beginning of the race and about 30 laps in the front end came in and we were able to cut the corners much better.”

Respecting his adversary, Larry said, “Mike is a great competitor and he and his family are a class act. I have no problem finishing second to him.”

Rudolph continued his three night string of top five finishes and said “So far this week we have had a lot of consistency on the track and we’ve gotten to the podium. We have found a little more speed and we’ll see what tomorrow night brings.”

Pauch had a solid drive after starting 14th and by the 20th lap was up into second place.

Pauch was disappointed with the end result and said, “It wasn’t my night. Nothing really went my way. I thought I was catching him pretty well, but then the caution came out, and on the restart, I couldn’t get my wheels underneath me. Once I did I was okay, but panicked and overdrove it. That’s what killed me. It was pretty wild there for a while. I thought I had a good car and I am disappointed.”

Friesen had his first top five of the week and overcame problems which saw him bring out the yellow on lap seven to send him to the rear.

Stew said, “This track is so weird, so greasy. We got in a couple of jingles early and were able to come back for a top five finish.  The car was good, but the track is so greasy. The lane changes. In the beginning you had to be on the bottom and then the middle came alive and it seemed we were able to get going. The Hallmar team didn’t give up on me and happy to get a top five.”