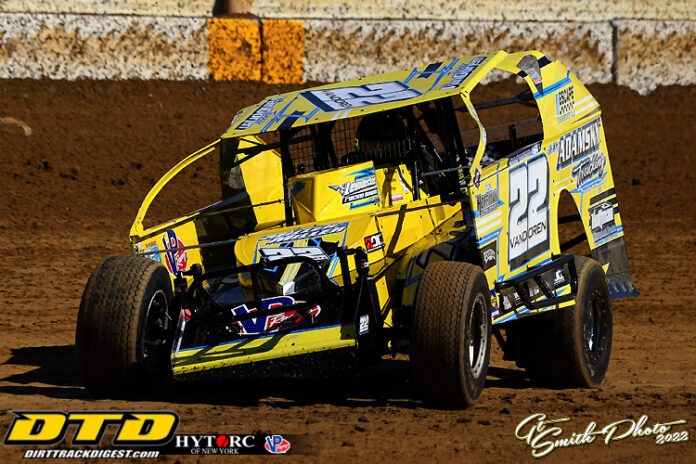 Fourteen-year-old Tanner Vandoren, in his mind, is just another one of the 42 Modified drivers at this year’s Sunshine Swing at All Tech Raceway.

Most kids his age would be star struck to run against the likes of Stewart Friesen, Matt Sheppard, Billy Pauch Jr, “The Doctor”, Larry Wight and a host of others, but the eighth grader doesn’t appear to suffer from star struck syndrome.

He said, “I don’t look at them in any other way that they are just drivers. We are all human.”

Tanner received a tremendous promotion as the upcoming season will see him competing weekly in a big-blocks at the Orange County Speedway.

He said, “I’ll be driving for Keith Hoffman and it means a lot to me that he will put me in it. It shows the hard work has paid off with receiving the opportunity to race for someone who brings a tremendous amount of experience and knowledge to the track.”

Tanner noted, “We will run weekly at Orange County and then we’ll go here and there. We also plan on doing some Deyo stuff.”

At All-Tech the team is a bit behind the Eigh-tball.

“We are running a spec 358 in our car,” said the youngster. “The car is working okay. We have been running up high as it is tough to compete against the bigger motors. The top-side allows me to build and keep momentum.”

The team has qualified for all three features and he explained, “We are testing some stuff, finding out what we have, and looking for more speed.”

Discussing the track, he noted, “The surface is a little like Weedsport. It’s slick. The top has a little more grip than Weedsport.”

So an 18th and 22nd on the first two nights are a start, but the young driver hopes to “qualify for the last two features in his first trip in a Modified to the Sunshine Swing.”

However, Tanner made his presence known on the third night of this series.

He started outside of the second row in heat two and battled Tim Buckwalter in the early stages. Billy Pauch Jr. had started 11th and was putting on a show as he passed five cars on the very first lap.

Pauch closed in on Vandoren, but the kid held off the ‘kid’s kid’ to finish second and qualify for the draw for the first time in his STSS career.

He eventually settled for 14th, but gained valuable experience which should benefit him in the future.