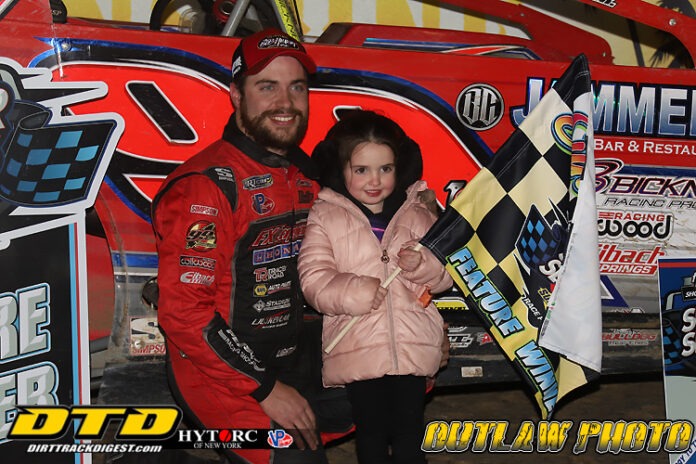 The combination of Wight and Florida seems to result in championships as he has taken his share of gaters away from the Super DIRTcar Series DIRTcar Nationals at Volusia Speedway Park.

Larry picked up an extra $750 for earning the title.

However, as rain fell outside of his hauler, Larry talked about earning his latest title and he was a bit surprised.

Reflecting on the run to the title, Larry said, “We feel great. It has been a struggle with adjusting to American Racers and the Deyo stuff (engines), but we did a lot of hard work, got the engine sorted out a bit. This is a 440 which is the twin to Ronnie Johnson’s that we built. R.J. won at Fonda the first time out with it.”

The 99L was last year’s Billy Decker ride and Larry said, “It was sitting around the shop and we had the new car with the big-block and we didn’t want to mess around with it.”

Continuing, he explained, “We ran a lot better this time around. We tried some intense stuff and it all worked out for us. It means a lot to win this. There are a lot of guys I don’t usually run against and they are pretty good. Other than Matt(Sheppard) and Stew(Friesen) I really haven’t competed regularly against guys like Billy Pauch Jr., Rich Laubach and others. To know we can be competitive with them, get the American Racers working and put together shows what a good team we can be. We’ve really cut out some of our issues and are making racing fun again.”

The Short Track Super Series is going to see a lot of Larry Wight and the 99L team this year.

Wight said, “We plan on running the Elite shows for Deyo and the STSS North Series. Not really totally sure what we are doing in regards to the Super DIRTcar Series, but we will probably go to Ohio for the first show and see how things work out and take it from there.”

Larry finished with a first, second and fifth for 275 points and was five points ahead of Erick Rudolph and Billy Pauch Jr. who had 270 each.

Matt Sheppard was fourth with 240 followed by Danny Johnson’s 214. Johnson loaded up after Friday night and headed home.