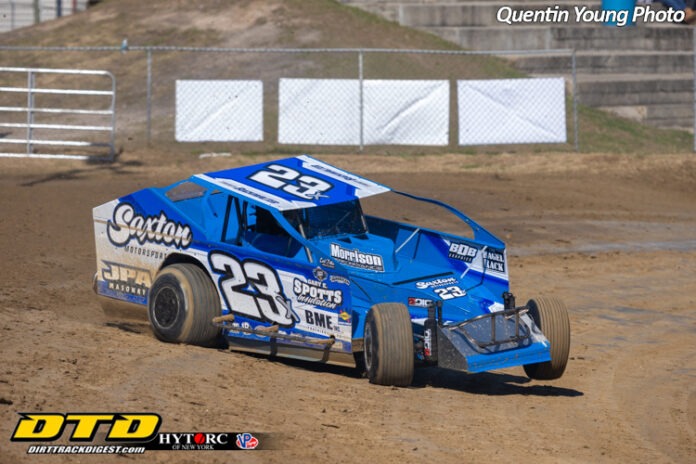 Qualifying for the A-Main at the Chili Bowl, getting the TQ win at Atlantic City and qualifying for the first two nights of the Sunshine Swing is a good start for Pennsylvanian Tim Buckwalter.

As he prepped for the third night at All Tech Raceway Tim took time to talk with Dirt Track Digest.

January brought the long awaited trip to Tulsa, Oklahoma for the Chili Bowl where Tim achieved a life time goal.

Looking back he said, “It was five years in the making. Matt Seymour and his crew put together a great car. The preliminary night we went from 20th to fourth. Saturday we  finished fourth of fifteen in the B. They redid the track so the first 17 or so laps you were just riding around wide open.

He finished 18th, but wasn’t unhappy.

Tim explained, “Just to be in that race is an accomplishment. The atmosphere and the racing talent out there is unbelievable. Previously the best I had ever don out there was getting to the C-Main.”

In conclusion he said, “We qualified and finished 18th. That gives me room for improvement and we will be trying again.”

It was then back East and  he TQ battles of the indoor arenas at Allentown and Atlantic City.

A fourth place finish for Buckwalter kicked it off and then it was on to snow covered AC.

This one turned out a bit different as the winner Ryan Flores was DQ’d, but it wasn’t until days later.

In fact Buckwalter was in the pits at All Tech when word game that he was the Atlantic City winner.

Tim told DTD, “That’s not the way I want to win, but when you race for a living you take them any way you can get them.  Now I am just getting ready for Syracuse.”

In regards to the AC feature, Buckwalter said, “I started 20th and finished second. I was all over Ryan, but just could not get by him.”

So the season continues and in three nights at All Tech he has gotten into the field during the Sunshine Swing.

“We have a 358 spec motor,” said Buckwalter.  “We are here learning and testing.”

Looking ahead to the season there will be variety in Buckwalter’s racing life as he said, “We are running Big Diamond on Friday, Grandview on Saturday with the 358 and Kutztown Action Track USA on Sunday with a Speedster and .600. I will run some USAC Sprints and the East Coast 360’s.”